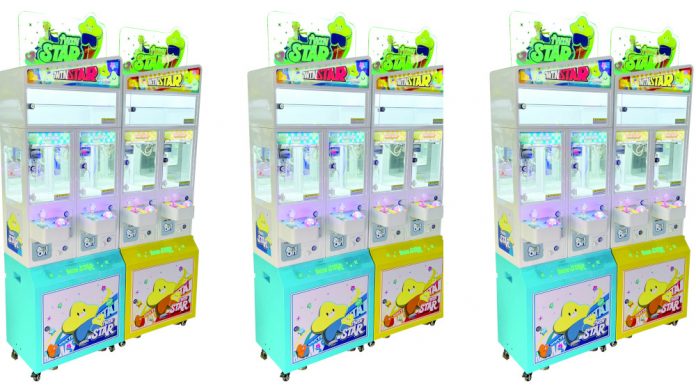 The new Twin Star Crane is proving a little treasure for Electrocoin, as the small-scale cabinet proves the perfect option for FEC operators short on space but keen for quality.

Electrocoin’s new Twin Star Crane product is rapidly earning itself a reputation far beyond its size, with the FEC model attracting customers with its bright colour scheme and small (but perfectly formed) features.

The two-player mini crane is aimed at all audiences with a durable metal cabinet and “exciting” sounds, accommodating prizes up to 8cm, and allowing operators to maximise their arcade floor income.

“The Twin Star is growing in popularity as it’s an opportunity to have smaller prizes in a crane which caters for the younger audiences but is played by the whole family,” said sales and marketing manager John A Stergides. “But also, for operators, as it has such a small footprint, it provides another offering for players whilst not occupying much space.”

“We only started rolling them out before Whitsun, and due to the demand, we just received another shipment. Operators love the flexibility and multiple operator modes that are available.”

Twin Star is available in two colour schemes – Yellow and Blue – giving operators choice and variety, and features a simple set up menu that allows for multiple modes of play. Though the Twin Star is one cabinet, the two cranes can be set differently, offering the standard crane mode in addition to prize every time.

The cabinet itself provides an upper display area to place different prizes for players to collect, as well as a storage area at the bottom, which Stergides notes is “very handy when storage space is minimal or none.”

“The Twin Star, albeit small, is a big ‘Star’ in amusement areas and a must for any games area and prize-vend operators.”