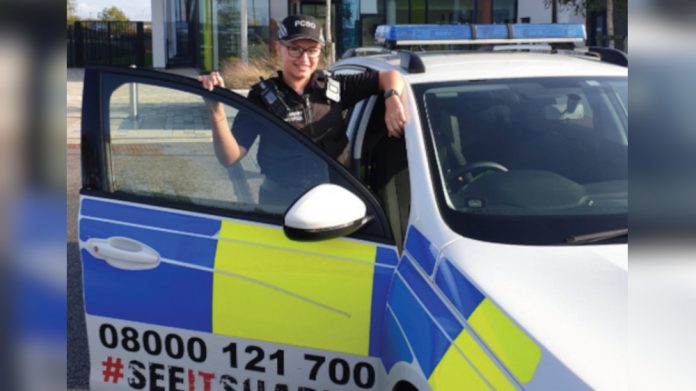 PCSO Emma Chadderton has spoken of her pride in being a Showman and a police officer, after being invited by Blackpool Police to share her story via social media during Gypsy, Roma and Traveller History Month.

Blackpool Police has marked Gypsy, Roma and Traveller History Month by handing its social media accounts to PCSO Emma Chadderton, who shared her experience as a Showman “to celebrate, educate and raise awareness” of the community.

Posting via Facebook on 22 June, the Blackpool South Neighbourhood officer spoke of the multiple good causes Showmen support, as well as her pride in growing up “with a Showman’s mentality.”

“I have grown up with the best of both worlds,” said Chadderton. “I have grown up in a Joskin world – I went to school and college, I have qualifications, always worked ‘normal’ jobs (some unacceptable in the Showman world) and I have always lived in a house.”

“BUT! I have grown up in a Showman world – working on a fairground, with Romani Travellers, and serving burgers and candy floss in a kiosk. I spent my 18th birthday moving from one ground to another, and cleaning out the boys’ trailer and – proudly – I have been brought up with a Showman’s mentality.”

Though Chadderton noted that as a teenager she had been “ashamed and embarrassed” to be a Showman, she was now “proud to tell people I am a Showman and who my family are. I want to educate people on who we are as people and as a culture, the things Showmen have done in the past and what we continue to do now.”

“My generation of Showmen are not just Showmen working in a Kiosk or on a fairground – we are serving members of Police forces, a Queen’s Guard who was on parade at Her Majesty’s Jubilee and Doctors! But when we are home and with our family, we get stuck in working a machine or serving food in a kiosk.”

Observing that there has traditionally been “a large barrier” between the police and the Gypsy, Roma, Traveller and Showmen communities, Chadderton added that through her position in Contact Management and the Blackpool enquiry desk, she has been able to directly serve people from those communities.

“As a PCSO working in Blackpool, I am the contact for the Travelling communities. I want to continue to work on helping people, breaking down those barriers, and more importantly educate those both in and out of the Constabulary on who we are as Showmen and about other cultures and communities similar to mine.”