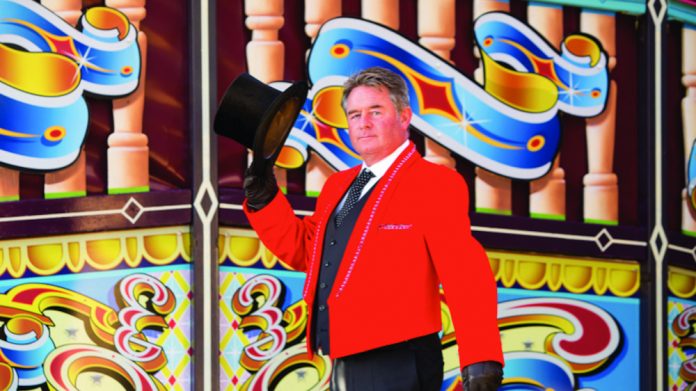 Norman Wallis is the focus of a new exhibition opening at The Atkinson this summer entitled Barnum in the Blood, exploring the Southport Pleasureland owner’s family legacy and future plans.

Southport Pleasureland owner Norman Wallis is to be the focus of a new exhibition opening at The Atkinson this June, following the Wallis family’s multi-generational history as funfair pioneers.

The Lord Street gallery and museum will host Barnum in the Blood: Six Generations, One Passion from 25 June, telling the story of Wallis and his role in driving Pleasureland’s popularity.

“Discover the story of the sixth generation showman behind Southport’s historic Pleasureland,” said a spokesperson for The Atkinson.

“From a young age Norman Wallis worked on his father’s rides and his grandfather was known as The Seaforth Barnum. Today he’s driving Pleasureland’s new heyday. The best is yet to come.”

The free-to-enter exhibition, which will run until 17 December, features artefacts and stories from Pleasureland’s past and present, including how the attraction survived the pandemic while being unable to open for the start of both 2020 and 2021 seasons.

Having reopened on 26 March, Southport Pleasureland is now preparing an expansive selection of new rides and offers, part of Wallis’ long-term plans to create a year-round attraction.

This year marked the unveiling of The Big Wheel Southport, a 35 metre illuminated observation wheel, created by Wallis’ company Universal Rides, which will remain in place until at least 2025.

“The wheel is a real showstopper and I think the town deserves a landmark feature of this calibre and we believe it will be incredibly popular,” said Wallis. “This fabulous iconic feature will give people yet another reason to stop and admire the sea views – and make a hugely positive addition to Southport’s visitor appeal.”

Work is also underway on a “very exciting” new Viking-themed adventure golf area, with plans for a Dinosaur Park unveiled in April that will help Pleasureland in its ambition to become one of the first net zero carbon theme parks in the UK.

Sefton Council also recently approved plans for a 35-metre-high, 260-metrelong roller coaster to be built along Marine Drive within three years, while a station terminal, cafe and ice cream parlour will soon be added to the Miniature Railway