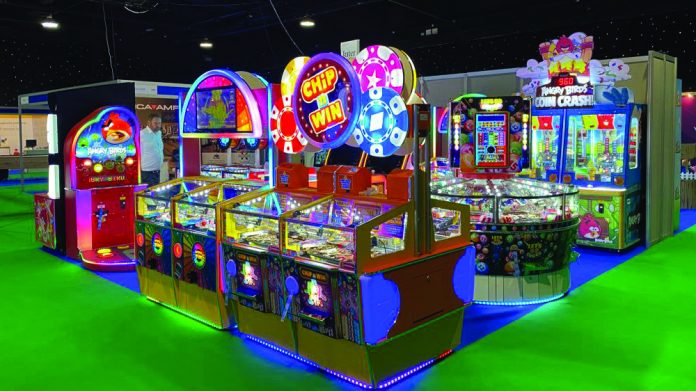 The return of the Interfun Expo this year provided Harry Levy with the opportunity to establish a series of new and unexpected leads, with trampoline parks, soft play sites and even universities making a beeline for the supplier’s stand.

Speaking to Coinslot, sales executive Geoff Spencer noted that though the show “could have been busier,” it still provided a diverse sales platform, stating “everyone there was positive, there was no negativity.”

“The people that came were all good operators,” said Spencer. “At this show we tend to get a slightly different demographic of operator than other coin-op shows.”

“There were fewer of your standard FEC amusements, but more trampoline and soft play operators for instance, which is good because it gives us new leads which we wouldn’t normally get at the traditional coin-op shows.”

With family leisure leading the buying trend, Harry Levy’s sports games, such as basketball and throwing titles were in high demand, as was VR.

“We had a really good response to the VR, it’s good to see new people looking at the product. The VR got the most interest, it always does, but we’ve also had good sales of the Chip n Win 4 Player pusher.”

However it was the instantly recognisable Jet Pong that delivered one of the show’s standout successes, with both sports bar chains and universities spotting the potential of the Beer Pong-inspired title.

“When I saw that in IAAPA Orlando it was a product that I knew wasn’t necessarily just an FEC product but it fitted elsewhere, which is always nice to have, a different bow to your arrow as such,” said Spencer.

“If you put a pusher in a university it probably wouldn’t get looked at, but put in a Jet Pong – which is in essence a beer drinking game – and you get a different response. It’s nice to have those variations in product so you can spread your wings a little bit and speak to different genres of operators in different areas.”