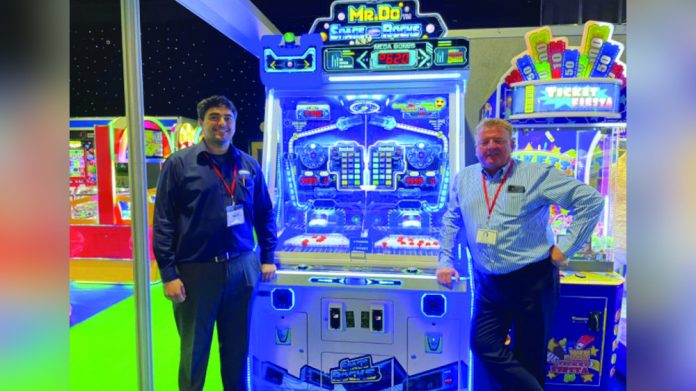 The debut of Mr Do Space Rocks delivered a “very positive” response for Electrocoin at this year’s Interfun Expo, with sales and marketing manager John A Stergides telling Coinslot “there’s been a really strong response.”

Electrocoin enjoyed a “really strong” appearance at the Interfun Expo in Leeds this week, with the debut of Mr Do Space Rocks and the return of Skill Shooter proving a big draw for operators and players alike.

Speaking to Coinslot during the show, sales and marketing manager John A Stergides explained how important it is for the supplier to show its products outside of London, and what’s driving interactions on the show floor.

“It’s been very positive, we’ve had some great feedback from our games,” said Stergides. “I’ve just had someone come up to me and say we had the best games here.”

“There’s been a really strong response to our Skill Shooter obviously, everyone loves it. And our new closed-loop ball pusher Mr Do Space Rocks is gaining a lot of attention – and a lot of orders as well.”

Interfun 2022 is the debut show for the new Mr Do title, and the response did not disappoint, with Stergides stating: “It’s been very well-received. People love to play it, they love the appearance as well. It’s been played non-stop.”

The value of showing these games outside the capital is also important for Electrocoin, with Stergides noting “not everyone can make it to London.”

“Having a show in the north is very positive, it’s not purely Coin- Op, it’s a bit of a mixed range, but it’s a good idea. Obviously many venues weren’t able to build on the traction of 2019 due to the lockdowns so it’s effectively like a new show.”

With the show clearly proving another successful outing for Electrocoin, Stergides is now looking ahead, with one particular date featuring prominently in the diary; the return of the much-loved Park Avenue Open Day on 8 June.

“We’ve had a lot of big companies already confirmed, and of course the Greek barbecue is confirmed as well. Everyone’s very excited. It’ll be the first time since 2019, and everyone’s looking forward to it. We have people coming from Ireland, from the Netherlands. It’s a very popular day.”