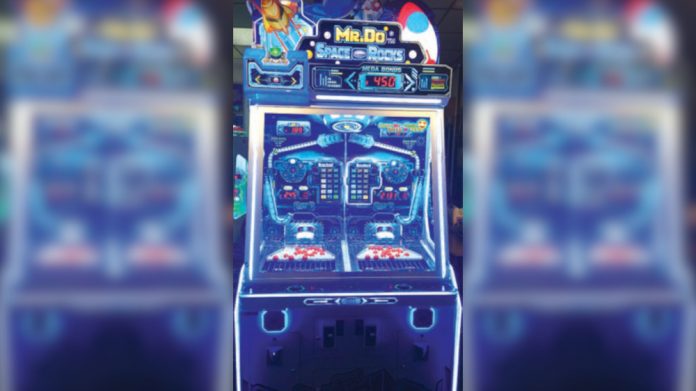 While showcasing its highly popular Skill Shooter, Mr Do Air Balls, Win Spin and Lady Bug Pusher at this year’s Interfun Expo, Electrocoin will introduce its latest closed loop pusher, Mr Do Space Rocks, to attendees on the 26 – 27 April.

Electrocoin will launch its latest closed loop pusher, Mr Do Space Rocks, at this year’s Interfun Expo in Leeds next week.

The London-based manufacturer and distributor will also be showing off its highly successful portfolio of products that was shown at EAG earlier in the year, with Skill Shooter, Mr Do Air Balls, Win Spin and Lady Bug Pusher all set to make an appearance on 26-27 April at at New Dock Hall in the Royal Armouries complex.

John A. Stergides, sales and marketing manager at Electrocoin, explained how the company has had to bring in more stock for the coming season due to demand, and expressed his excitement over its latest product, which has been hitting all the right notes in the lead up to its launch.

“Mr Do Space Rocks has been testing very well and is quite an eye catching piece,” he said, adding that it is likely to be as popular as Skill Shooter and Mr Do Air Balls, which both’ went down a storm at EAG’.

“The Skill Shooter and Mr Do Air Balls have been catching the seaside sector’s eye,” he continued. “We are bringing more units to keep up with the demand as operators begin to prepare for the rest of the season which is looking positive.”

Operators in the UK are optimistic for the 2022 season, according to Stergides, with overseas operators also reporting favourable conditions now that restrictions have begun to ease and summer has started to show its face.

“Overall its looking good and it shows the leisure market is growing not just domestically but abroad too,” he stated, explaining that the biggest challenge was getting stock into the UK and out to international customers. “Like for most companies, there has been delays with transport, abroad and domestically, which has been an obstacle but we manage to plan ahead when bringing new stock into the UK as we tried to keep up with the demand for our popular products.”

While the seaside sector has taken to Skill Shooter and Mr Do Air Balls – with Mr Do Space Rocks expected to follow suit – the AGC sector has been finding success with the company’s new all-in-one Bar X Tablet System. The former, however, will be the focus in Leeds next week, with Electrocoin expecting strong interest from the seaside sector at its jam-packed Interfun Expo stand.