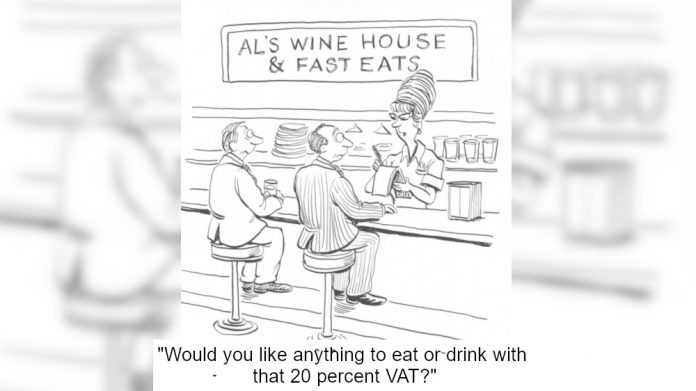 As one door smacks you in the face another smashes into the back of you – what has hospitality done to merit such appalling and insensitive treatment from the government?

The first sector to be forced to close during lockdown and the last to be permitted to re-open it was therefore perhaps appropriate that Chancellor Rishi Sunak chose the second anniversary of hospitality businesses being shuttered in response to Covid to deliver another blow to the sector.

Sunak’s decision to ignore the well-presented arguments put forward by UKHospitality and others to freeze VAT at 12.5 percent and in the process protect fragile businesses, in favour of returning to the prepandemic 20 percent rate for the hospitality and tourism industry is indicative of a government that’s either tone deaf or doesn’t care about a sector that has the ability to lead the UK’s post-pandemic economic recovery.

Kate Nicholls, the chief executive at UKHospitality called the decision a ‘massive missed opportunity’ others might refer to it as a massive kick in the nuts. The arguments about VAT cannot be seen in isolation: this is not about an industry simply wanting a better deal. UK hospitality businesses are still suffering the devastating effects of Covid. They have huge accumulated debts built up over a two-year period, they are facing eye-watering rising energy bills – some up by as much as 200 percent – chronic staff shortages that have been compounded by Brexit and a rates regime that’s simply not fit for purpose.

A survey conducted by trade bodies including the British Institute of Innkeeping (BII), the British Beer and Pub Association (BBPA) and Hospitality Ulster showed that soaring energy costs are forcing the overwhelming majority (76 percent) of hospitality businesses to raise their prices while 38 percent have cut their trading hours. With inflation set to hit a 40-year high of 8.7 percent the UK population is facing the biggest ever fall in living standards – not exactly the best time for pubs to be hiking the cost of a pint by as much as 50p. But at least pubs, unlike AGCs and arcades have that option as unpalatable as it may seem.

Taking the positives out of the Spring Statement the increase in NIC threshold for employees will boost disposable income. However, for many businesses survival is about the here and now and many might not see April.

The twists and turns of political rhetoric

David Clifton is a hugely experienced licensing and gambling consultant. But even he is wondering where the government is on its gambling posturing. Here, the Clifton Davies Consultancy director talks Coinslot readers through patterns in the messages from gambling minister Chris Philp.

Chris Philp is a politician. He and his SPADs know the expectations of the audiences he addresses. Conclusion of his keynote speech at the Gambling Reform Rally with the words ‘Change is needed and change is coming’ is exactly what all those attending wanted to hear. The well-publicised photograph of him and Paul Merson directly facing the camera whilst jointly holding a placard, professionally prepared by the conference organisers, conveying in capital letters the succinct but strident message ‘Reform Gambling. Act Now’ didn’t get taken by accident. It will have been carefully orchestrated to capture maximum media attention, as indeed it did.

But does any of that mean the Minister is hostile to the gambling industry?

In my opinion – not of itself, no. If one studies what he actually said in both that speech and in his GambleAware Conference speech in December last year, there was a sense of balance not dissimilar to that conveyed by his predecessor as ‘Gambling Minister’, Nigel Huddleston, when launching the Government’s Gambling Act Review a year earlier.

For example, the industry is unlikely to contest Philp’s assertion (in the GambleAware speech) that: “to be workable and prevent harm, affordability checks need to be proportionate”, particularly given his follow up comment that “demanding payslips or bank statements from every customer spending £100 or so is likely to be unwelcome, disruptive and disproportionate to the risks”.

From one perspective, as Minister for Tech and the Digital Economy, Philp may be considered eminently suited to be presiding over a review that was always going to primarily focus on the online gambling sector.

From another, it’s easy to criticise inaccuracies such as the comment in his more recent keynote speech that “internet gambling didn’t really exist in 2005”. It did. I had been advising clients on opportunities in that area since the mid to late 1990s.

But that misses the real point, which is the reliability of the ‘evidence’ on which the Minister is relying in formulating the content of the forthcoming Government White Paper.

An obvious example lies in the Minister’s reliance (specifically mentioned in his Gambling Reform Rally speech) on conclusions within the September 2021 Public Health England Gambling-Related Harms Review, notwithstanding the Review’s researchers having seemingly conceded flawed methodology behind certain of those conclusions.

It remains to be seen whether finer points of arguments such as that will carry any weight at all when it comes to the public and parliamentary debates after the White Paper has been published.

What seems more certain is that the main focus of those debates will remain on the online sector. Whilst a danger exists that the land-based sector may risk suffering some collateral damage during that debating process, Philp’s comments during a House of Commons debate on 21 March, coupled with strong Parliamentary support for the racing industry and the non-remote casino and bingo sectors, should hopefully mean they escape being tarred with the same brush as will be applied to the online sector.