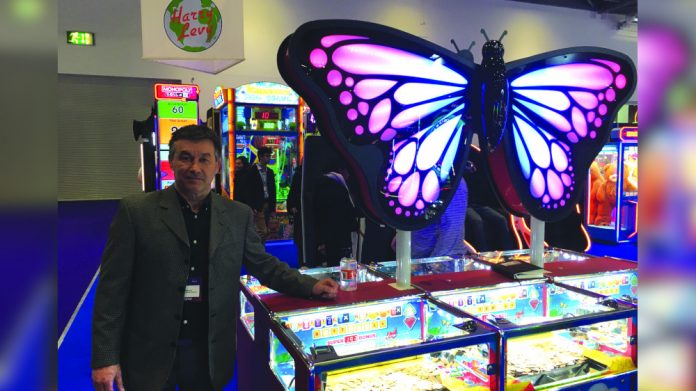 Coinslot caught up with Geoff Spencer, sales executive at Harry Levy Amusements, to discuss the company’s product highlights at EAG, including VR Shark, water game Dinosaur Era, the Wheel of Fun coin pusher and six-player pusher Butterfly, redemption solution Pizza Party, along with the exciting new release Jet Pong. It was some display for the redemption giants.

Coinslot: How did EAG go for Harry Levy?

Geoff Spencer: While it wasn’t an exceptional show, we came away feeling it went well on the whole. Prior to the show we weren’t sure what to expect, given everything that’s happened over the last two years.

We did some business at the show, it wasn’t quite as much as we’d usually do. However this year, because of the date change we’d already done a lot of business prior to EAG, particularly across January and February.

I think we possibly lost a few attendees due to the tube strike. In particular, those people who like to come and have a look at the product on the first day before committing to buy on the second.

During the show we primarily saw our regular UK customers, but we were also pleased to meet with several new international customers. But I would note that in general it tends to be the same faces at EAG.

Coinslot: What products were you showcasing at this year’s EAG?

Geoff Spencer: We presented both two- and three-player versions of VR Shark. Those generated a lot of interest.

We also debuted the Wheel of Fun coin pusher for the first time. That’s available in either closed loop or coin-in/coin-out, so people had to the chance to see that.

Another show highlight was our four-player water game Dinosaur Era. That was its second showing in the UK after we presented it at ACOS last year.

We had the Angry Birds Whacker at the show, together with Angry Birds Stomper. In the case of the latter, it was the first time we’ve presented it with a new modification which has seen us update the stamp-on buttons to a fresh design. The feedback on those was really positive.

We also displayed our six-player pusher Butterfly. It is the only six player solution on the market and it received a very strong response. It was the first time we’ve presented Pizza Party and that received some excellent feedback. It’s a two-player redemption solution with a unique scoring system which allows players to score in multiple places on a rotating ingredients board.

We were also launching Jet Pong for the first time in the UK, it’s inspired by the popular US novelty game Beer-Pong. We signed the agreement to be the UK-exclusive distributor of Jet Pong back in November at IAAPA. It was really exciting to press ahead with the product’s launch over here. We’ve already sold out the first container. The reception for that at EAG was really fantastic!

Coinslot: What was the mood like at the show?

Geoff Spencer: I’d say it was buoyant overall. Operators are confident that it will be a good season. Unsurprising the cost of living crisis was a talking point at the show, with concerns about how that could impact on disposable income and affect families in general.

Nevertheless, people are still expecting a good summer. All the holiday parks I’ve spoken to are fully booked. Even though we’re gradually moving out from the pandemic, it looks like staycations will be carrying on.

It all looks good for the summer, now we just need the sunshine and a nice bit of weather for the Easter bank holiday!

Coinslot: What’s next on the agenda following EAG?

Geoff Spencer: We’ve got the InterFun Expo 2022 in Leeds this April. Following that IAAPA will be back in September. So it’s set to be quite a busy time. Alongside that, we’ve also got a couple of international events.