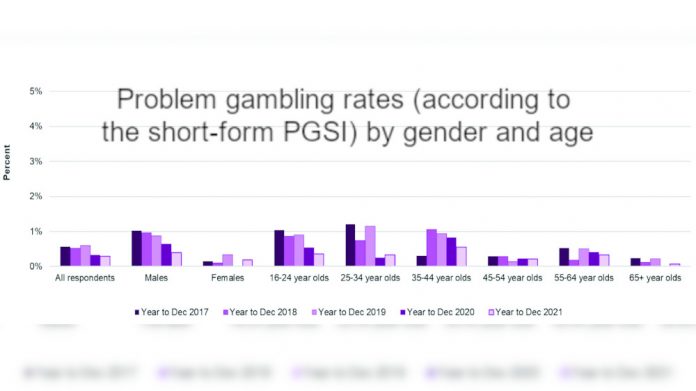 The British public is starting to take notice of the gambling industry’s efforts to reduce problem gambling and offer a safe and fair service, with PG rates remaining stable at their historic lowest level of 0.3 percent and attitudes towards the industry improving over 2021, according to the Gambling Commission’s own statistics.

Problem gambling rates remain stable at a record low of 0.3 percent and attitudes towards the industry are improving, according to data from the Gambling Commission.

This has coincided with an improvement in attitudes towards the industry from the public, with 36 percent of gamblers agreeing that gambling was fair and trustworthy, an increase on the 32 percent the previous year. Additionally, and very much against the aggressive narrative of anti-gambling lobbyists, the percentage of respondents who agree that ‘gambling should be discouraged’ decreased from 63 percent to 59 percent, and the percentage that believe that gambling poses a danger to family life fell from 75 percent to 70 percent.

While there is room for improvement in these figures, it is important to note that no distinction is made between the types of gambling that the attitudes relate to. And this will remain a concern for the land-based amusements sector; there cannot be many that consider a pusher to be dangerous to family life, and yet it is considered gambling, and so can be lumped into the same pile.

In fact, some of the public’s negative attitudes towards gambling may not be towards licensed operators at all, but those in the black market. A spokesperson for the Betting and Gaming Council wrote that the statistics are “set against the backdrop of increased use of black market sites in the UK”. Ahead of the upcoming review of the gambling act, BGC chief executive Michael Dugher warned that “there is no enforcement solution” to the black market and that the government and the regulator “need to stop customers being driven there with further restrictions that are cumbersome, intrusive and ill-thought-through”. He believes the latest figures from the Gambling Commission show the positive progress the industry has made in raising standards on safer gambling, calling on the government to take an evidence based approach to the upcoming White Paper.

“As we continue to make progress on problem gambling and drive ever higher standards on safer gaming in the regulated sector, it’s vital Ministers don’t do anything that drives people to the unsafe, unregulated black market online, which has none of the protections or safer gambling interventions that we see with licensed operators,” he commented. “Ministers need to listen to the 119,000 people whose jobs depend on the regulated betting industry and the millions of punters who overwhelmingly bet safely and responsibly – not the usual suspects from the anti-gambling lobby who just want to ban stuff because they don’t approve of how millions of people choose to spend their own money”.