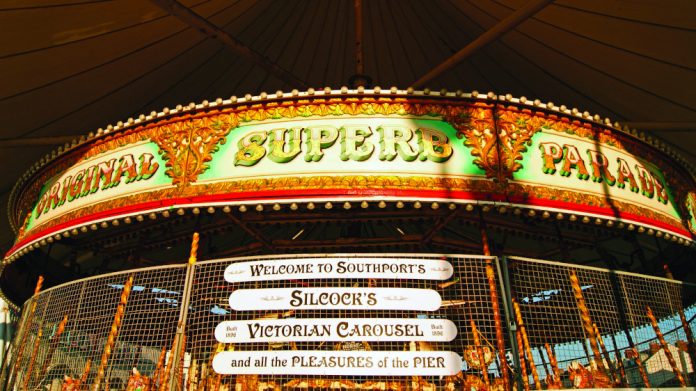 The 121-year-old carousel, the Golden Gallopers, located at the Pier Forecourt in Southport, is set to return this February Half Term.

Southport will be welcoming the re-opening of its 121-year-old iconic carousel as owners Silcock Leisure prepare for a year that promises another boom for the proud seaside resort.

Built in 1901, Herbert Silcock’s Golden Gallopers will be ready to welcome the next generation of children and families when it reopens on 12 February.

The 18 ton ride is 42ft in diameter, 18ft tall and has three Cockerels and 33 Horses each named after a member of the Silcock family and family friends. The Cockerels and the Horses on the inside of the ride are original Anderson carvings and date to when the ride was built at the turn of the 20th century with the rest of the horses being replaced by copies due to wear and tear.

“We have been working hard over winter keeping the Carousel in tip top condition,” said Silcock’s operations manager Serena Silcock-Prince. “It is a really beautiful attraction. It is from the turn of the last century – it is an antique.

“It is a real landmark for Southport, like Southport Pier, like Lord Street. People come from all over the country to enjoy it. It really does take people back down memory lane to their own childhoods,” she continued.

“Southport has some fantastic landmarks that make it such a unique holiday resort. We had a customer in here last week who said to us ‘isn’t Lord Street unique?’ We sometimes take it for granted just how magical a place this is. This half term, we hope people will want to come out and have some fun.”

The Galloper set has a lengthy history and was built in 1901 by Frederick Savage of Kings Lynne. It was purchased by Charles Stock, a travelling showman born in Bristol and was was subsequently owned by several travelling fairs over the years and featured at Battersea Park in 1951 for The Festival Of Britain. During this period it was operated by the Botton Brothers.

The Carousel was purchased by Herbert Silcock in 1989 and made its debut in Southport following a year of pain-staking restoration.

“Grandad loved the Gallopers. Even when he was 94, he was here every day, checking on the ride and making sure it was being run as he intended,” Silcock-Prince stated. “He was a born showman. It was in his blood, he was a real enthusiast.”