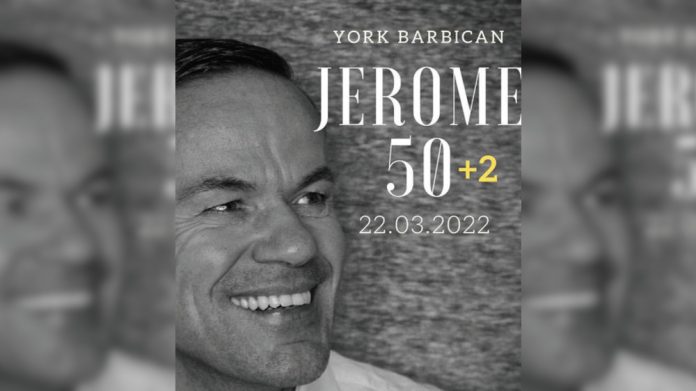 Showman and singer Jerome Remblance is finally to perform live at the York Barbican on 22 March, two years after an original concert was cancelled due to the pandemic. The showman is finally putting on a show.

Showman Jerome Remblance is to perform live at the York Barbican in March this year, two years after an original concert at the same venue was cancelled due to the pandemic.

Having been set to perform the headline show in March 2020, the Leisureland director will now take to the stage on 22 March, supporting local cancer and diabetes charities.

“Jerome Remblance is a local businessman from Pocklington, who aside from business has always been a musical talent,” said a spokesperson for the York Barbican. “Back in the 90s Jerome sang with an original soul/funk band called Naked Orange, however, the band disbanded due to other commitments.”

“Since the band split, Jerome has gone on to sing on his own, performing at various parties, weddings etc, but really missed the buzz of playing with a band. And now, Jerome will fulfil his ambition to play in a large venue with a headline show at York Barbican.”

Commenting on the original concert, Remblance said: ”I’ve always wanted to do this but never got round to it, and the longer I leave it, it just won’t happen.”

“I’m really excited to be playing York Barbican with a full band in front of a sold-out crowd.”

According to the event description, Remblance’s setlist will cover everything from swing, to soul, to reggae, with the show itself supporting local charity York Against Cancer and Diabetes UK.

“Just a reminder that there is a party afterwards at Manahatta Cocktail Bar, with DJs Swaley and Jerome Jnr with live percussion,” added Remblance. “Free entry with proof of concert ticket.”

“For those who haven’t received their tickets, chances are you only requested an eticket and not a paper one. If you log on to your ticketmaster account and go to your upcoming events, your e-ticket should be there.”

Updating attendees who had booked for the March 2020 event via its website, the York Barbican stated “all tickets remain valid for the new date, please get in touch with your point of purchase if you have any questions.”