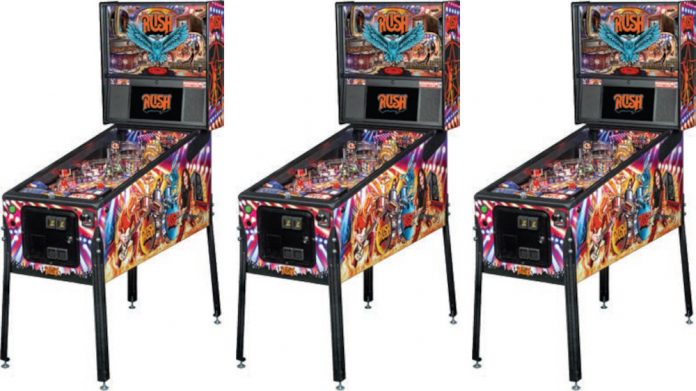 Over 40 million records sold. Countless sold-out tours. A star on the Hollywood Walk of Fame. But this is the first time Canadian rock band Rush have been celebrated in a pinball machine, which Electrocoin have taken on its worldwide public debut in Funland at the Brunswick Centre, London. On the Rush Premium and LE models, the pinball experience includes a motorised ramp with custom lighting effects and a custom sculpted Clockwork Angels Clock, inspired from Neil Peart’s bass drum from their Time Machine Tour. This motorised clock illuminates, and when it strikes midnight players will be transported to a Headlong Flight Multiball frenzy.

Additional features on the Premium and LE models include a custom subway system, locking pinballs to unleash a high energy Far Cry Multiball. The ‘Dead End’ vertical upkicker propels pinballs up an additional wireform ramp return for non-stop pinball action, and, as an encore, a three-bank of musical drop targets guard a secret ball lock for players to discover an adrenalised Freewill Multiball to continue their musical pinball journey.

“Partnering with Rush, we created a musical pinball experience that every fan will want to explore,” said Gary Stern, Chairman and CEO. “Incredible music, memorable toys, unique mechanical pinball action, and custom speech will make players feel like they are on tour with the band,”

Rush pinball also includes Stern’s new Insider Connected system, which enables players to interact with the game and a global network of players in a variety of ways, while also providing an operator-focused toolset to drive location play and remotely manage every aspect of the machines.