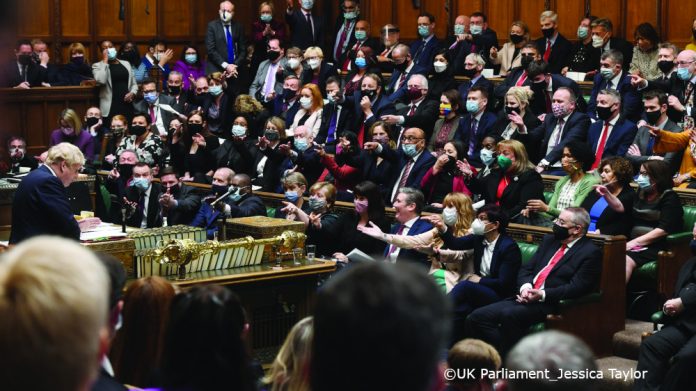 Prince Andrew and his favourite Admiral uniform, the motives that are driving Michael Gove and what’s next for brand Boris? All topics aired in this week’s Off The Record

Despite his fulsome apology broken Boris is fooling no one but surely the next ‘revelation’ will force him to stand down?

If we were talking about a more, shall we say ‘normal’ individual then the furore surrounding the so-called ‘partygate’ scandal would have finished a Prime Minister off forcing him or her to fall on their sword.

But Boris Johnson does not fit most people’s definition of normal. He has a skin like a rhino and problems fall off him like water off a duck’s back.

But anyone listening to radio phone-ins after the story broke that he had attended a party to which his most senior civil servant Martin Reynolds had invited 100 staffers urging them to bring their own booze, will have been moved by the rage and distress of callers as they recounted their own tragic stories of lost loved ones and the personal sacrifices they made in May 2020.

This isn’t an isolated aberration on behalf of the PM who must be consumed by fear and dread of what a certain Mr D Cummings has got up his sleeve and what revenge he will serve-up next. This isn’t over by any stretch of the imagination and even Sir Keir Starmer can’t fail to land some big punches on a defenceless PM this time round – can he?

Will Andrew do the right thing for the Royals even if it means hanging-up his favourite Admiral’s uniform?

Senior former army officer Colonel Tim Collins is the first person from the military to break rank and urge Prince Andrew to give up his honorary military titles in light of the civil suit being pursued in the United States by Virginia Giuffre.

Colonel Collins told national media that it would be better for everyone if the Duke of York “jumped before he’s pushed” and in all honesty who could disagree with him? As a royal he’s so far down the pecking order that he’s irrelevant and all that he succeeds in doing is bringing embarrassment to his mother, the Queen and providing republicans with all the evidence required to argue for a dramatically stripped back royal family (at best).

For someone who hasn’t necessarily enjoyed a glittering military career Prince Andrew has accumulated a raft of honorary titles from being Colonel-in-Chief of the Royal Irish Regiment to a role with the less impressive sounding Small Arms School Corps.

Having so many titles obviously causes a few dilemmas. At the funeral of Prince Philip, the Duke of York who was made an honorary Vice-Admiral in the Royal Navy in 2015 reportedly requested that he wear his Admiral’s uniform – a request that was robustly denied by the Queen.

In a sign of the times the flat pack Swedish giant Ikea has confirmed that it is to cut the sick-pay entitlement for some unvaccinated members of staff who have had to isolate after coming into contact with positive cases of Covid-19. Un-jabbed workers who are required by the government to isolate could receive only the legal minimum of £96.35 a week, a figure that is less than 25 percent of what shopfloor staff at the furniture chain which has 21 large stores in the UK and employs 10,000 people, earn.

In the UK we have been relatively tolerant of the rights of individuals, far more so than in the rest of Europe. I think the erosion of civil liberties and freedoms is actually the beginning of a very treacherous and slippery slope. Fast forward to a time when Covid isn’t the first and the last item on the News At Ten and see how reluctant the authorities will be to hand back the freedoms they have removed because one thing is for sure – it’s much easier to restrict people who no longer have the rights that prior to 2020 they perhaps all took for granted.

Although I’m a big believer in the rights of individuals to do and act in a way that they think is best I have to admit that I haven’t got that much sympathy with the ‘will he play will he not play’ soap opera involving Novak Djokovic and the Australian authorities in Melbourne.

It appears that the Serbian world number one has been caught in a complex stand-off to which he has made a significant contribution. Arguing that he does not need to show proof of vaccination based on a previous Covid infection the world’s media subsequently applied a forensic examination of who said or did what, where and when. In the press conference featuring Novak’s mother, father and brother the question they failed to answer was why if he tested Covid positive on December 16th did he appear at a public function (without a mask) the following day?

Supporters of Novak Djokovic are arguing that in relation to his visa application he has done everything by the rules and deserves an apology for being placed in a former hotel turned holding centre being served bread with mould and denied access to tennis courts. On the other hand, ordinary Australians have had to endure close to two years of the most austere lockdowns and restrictions and feel outraged when they perceive that there’s one rule for them and another for the elite in society. You can’t help feeling it’s a lose lose for the Australian government which will be damned if it does and damned if it doesn’t.

This one is definitely going to a tie break.

Gove is shifting from hawk to dove on Covid restrictions but could he be courting Tory backbenchers?

It’s not that often that I find myself agreeing with Michael Gove but I think he’s correct when he says that Britain is close to living with Covid, hastening the lifting of Plan B restrictions, hopefully by the end of January.

Gove, who has been an advocate for the implementation of tougher restrictions admitted – perhaps with one eye on a potential Conservative Party leadership campaign, that he was wrong to push for even more rigorous rules over Christmas.

A Covid exit strategy has to be the next big ticket item on the government’s agenda. Such a strategy would include the winding-up of the test-and-trace system, ending self-isolation rules and ending the working from home instruction, in the process kick-starting many, many hundreds of local economies throughout the country. If you compare the situation in the UK with for example that in the Netherlands it’s like chalk and cheese.

Holland is experiencing a full lockdown with the very real danger of widespread civil unrest if the government extends restrictions. Here, (certainly in England) I think walking down the high street you would be hard pressed to know that we are in the midst of a public health emergency.

If the NHS can survive the next three weeks and come out the other side, I think we will be living in the new normal – at least until the next variant arrives on our shores!