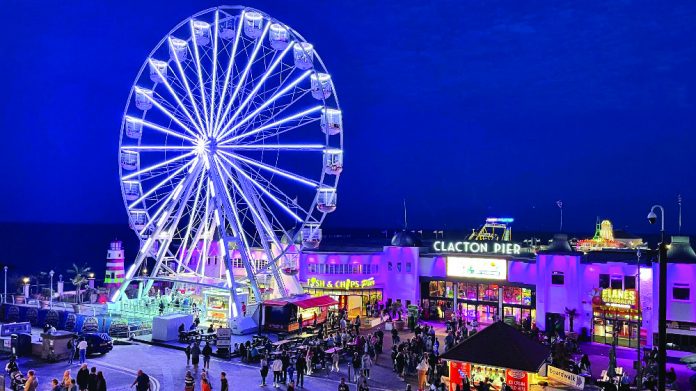 Clacton Pier has announced its 33-metre-high observation wheel “is here to stay,” after the Ball brothers purchased the landmark attraction following a successful summer.

Clacton Pier has announced its popular observation wheel will now become a permanent feature, after purchasing the 33-metre-tall attraction.

The wheel was first installed last year to celebrate the landmark’s 150th anniversary, and will now act as “a show of faith in Clacton and its future.”

“This is another significant investment for us,” said pier director Billy Ball. “It would have been easy to continue to lease the ride from its previous owners, but we wanted to add it to our offering on a permanent basis.”

“We may well have to take it down for a few months in the winter for its regular maintenance, but it is now our property, and it is here to stay. We are delighted to be able to make this announcement which we feel is an important step to help return Clacton to premier league status.”

The ride was introduced in June last year after Tendring District Council granted planning permission for the wheel’s installation on the forecourt at the entrance to the pier.

Its arrival marked the 150th anniversary of both pier and town itself, and joined new rides including the Looping Star and Race O’Rama as part of the pier’s enhanced offer.

The wheel entertained guests until October, when it was dismantled in order to allow temporary relocation to Swansea Winter Wonderland – an appearance which had been booked prior to its installation in Clacton.

“The ride is due to start arriving back from Wales on 11 January and the main structure will begin to be rebuilt the following day, weather permitting,” said pier communications director Nigel Brown.

“Work is due to be carried out on the canopy and cars as part of their maintenance and they will be added later ready for half term. Preparations for the return of the wheel have already begun this week with its site being made ready.”

Though the wheel will return to its previous home at the front of the pier, it could be moved further onto the site in the future, with Ball noting the impact the attraction has on generating increased visitation.

“Buying the wheel is a major statement of intent and a show of faith in Clacton and its future.”

“The ride pulled in the crowds last summer and helped to increase footfall overall.”