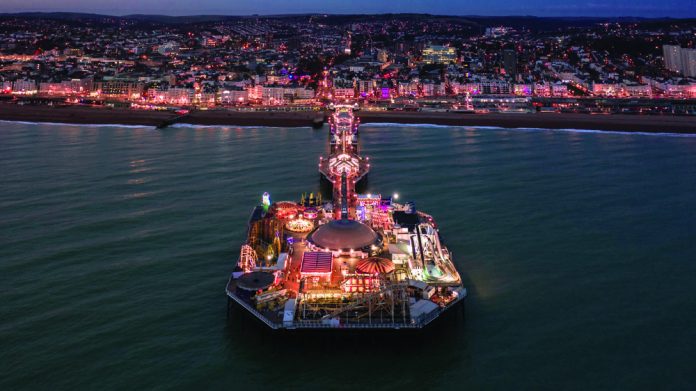 Brighton Pier was selected as a key site in the government’s booster vaccine drive, with volunteers stationed at the landmark every day until Christmas to encourage take up.

Brighton Pier was selected by the government as a key site at which to deploy vaccine ambassadors in the run up to Christmas, with hundreds of volunteers stationed at the landmark to distribute leaflets.

The Community Vaccines Champion initiative comes as part of a £22.5m funding drive to encourage vaccine take up, with “street teams” visiting 21 of the most popular areas around the country.

“We are in a race between the virus and vaccine and we are doing everything in our power to get jabs in arms as quickly as possible,” said health secretary Sajid Javid. “We are calling on people to Get Boosted Now as part of our national mission to reinforce our wall of defence against the rapid spread of Omicron.”

“I want to thank the thousands of people who have heroically stepped up to support our vaccine drive. We’re all in this together – please play your part.”

The street teams are made up of 900 volunteers who will set up at popular locations such as Brighton Pier, Liverpool One Shopping Centre and King’s Cross Station every day from 19 to 24 December.

“Each team of vaccine ambassadors will have a branded van, six staff, banners and leaflets containing information on vaccines and COVID-19,” said a government spokesperson. “The teams are comprised of people who speak 33 different languages between them.”

“They will cover the entire country – from Newcastle to Brighton – in areas where there is likely to be a large number of people, including council-organised Christmas activities, supermarkets, train stations.”

More than 750 armed forces personnel have also been drafted in to support deployment of booster vaccines across the UK.