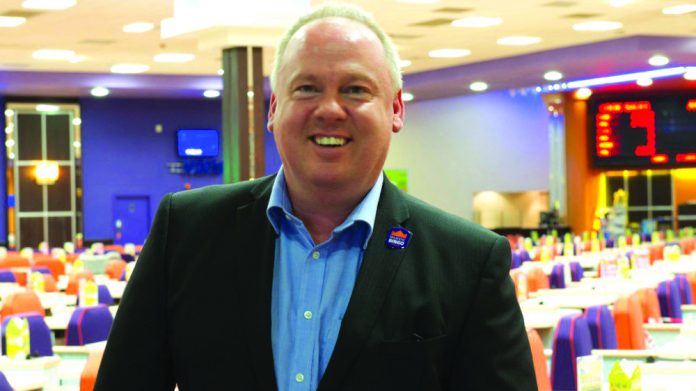 The pace of recovery in the bingo sector is causing considerable concern amongst operators. “Slow and stuttering” was the best Majestic Bingo’s Mark Jepp could offer citing supply chain and rising energy price issues as taking their toll. But then along came Omicron. For Jepp, whose operation is currently flying high on innovation and customer offering plaudits, the new variant is a major blow to an already deflating consumer confidence. And that, he insists vigorously, is down to the constant negative messaging from the government and the media. Cut it out, he says.

Coinslot: There are reports that November has been a tough month for the bingo sector, is that a traditional pattern or down to current issues that we need to be concerned about?

Mark Jepp: It has certainly been tougher than expected or anticipated for sure. Post opening in May, the sector limped through the summer – and a football tournament where England did well for a change – on to better times which typically starts to run from August onwards. And that was the case through September, but after some slow, stuttering growth into October, which didn’t turn out as good as expected, and through Halloween and Bonfire night, November’s seen the sector fall off a bit of a cliff.

Coinslot: What’s driven this change in the pace of recovery?

Mark Jepp: Gas, petrol prices, general increase in cost of living, the reduction in benefits such as universal credit, the worry about shops running out of stock (making customers shop early) – all of these issues have hit pretty hard. But that’s been compounded by the emergence of a new variant and the ensuing Government and media scaremongering which has added to the current downturn. Any one of those issues would typically impact our demographic, but put them all together it does create a perfect storm of negativity.

Coinslot: All the more important then that Christmas delivers a boost; do you think you can get back on track amid the Omicron chatter?

Mark Jepp: We were hoping and working for a better Christmas trading period and there were some positive sessions over the last couple of days. But today’s announcement of Plan B will do nothing for the sector and will just undermine customer confidence even further. There is a thought that maybe for some of the customers who are not attending due to the worry of Covid, they might be comforted by the return of a mask mandate, but we shall have to wait and see. But sensing where the media is going with the Omicron news cycle, I do worry that over-reaction, as we have seen already, will impact far greater the already fragile confidence and move us backwards once again. Some recent research we conducted highlighted both a lack of cash and the older demographic of our customer base still being worried about Covid. But for many of customers the main concern is Covid; that’s the dominant issue as to why some customers are still not coming out as yet. And none of this will be helped by government messaging, media scaremongering coverage and a new variant.

Coinslot: It’s clearly been a testing return to action, particularly with supply chain issues and inconsistent consumer confidence. How has this impacted Majestic directly?

Mark Jepp: Although Majestic has not been impacted as much as some, even we have had recruitment challenges in the early days of reopening. And in terms of the supply chain, not being able to order things such as chicken burgers (who would have known!), suppliers running out of crisps etc has inconvenienced our customers for sure. The supplier issues have been real and covered a multitude of areas, but I am certain Brexit has had a part to play here. But the government are just not being honest as to the reasons behind the current issues. Brexit was supposed to be the start of something great (according to Johnson), but they didn’t tell us about the lack of lorry drivers and the fuel shortage bits – in some ways they have been able to hide some of this behind Covid.

Coinslot: There are some initial signs that the supply chain is beginning see some light, but it sounds like Omicron is the big fear for you now?

Mark Jepp: I hope the introduction of further restrictions will not lead to further lockdowns, but even so they undermine further the challenging situation we are in. The frustrating thing for me is the people who cry for these lockdowns never put it into the context of what other harms come from such actions such as mental health, impact on children’s education, placing more people into poverty etc etc etc – the list and misery goes on.

Coinslot: Overall, how do you assess the bingo sector’s recovery since lockdown and what does it need from government to re-energise things?

Mark Jepp: It started off OK and as I said before, the recovery has definitely tailed off, in the main due to all the issues mentioned – cost of living, fuel prices, gas prices, negative government and media messaging (even before the new variant). So to move forward we have to start by addressing overall consumer confidence, change the messaging that it is OK to get on with your lives (jabs were supposed to be the key to freedom right!!??) and get on with living with the virus. We also need to sense some confidence in the economy and start seeing the benefits of what Brexit was supposed to bring. And the Government must consider what support it can continue to give the sector such as continued helped with rates etc. We are now facing this new crisis on our own – there’s no CJR scheme to help mitigate some of the impact. But in simple terms, they need to change the messaging and get people old and new to live with the virus and not spend the rest of their lives concreted to the sofa.