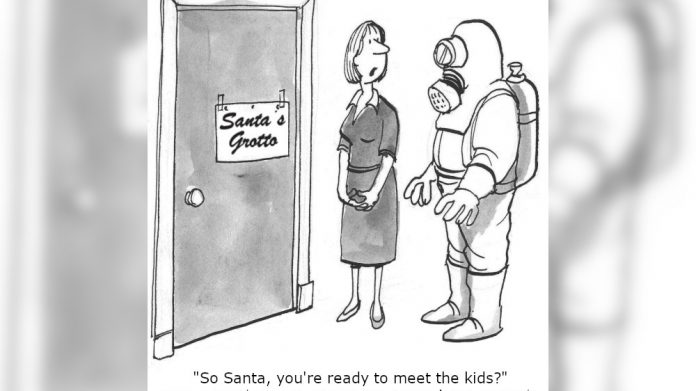 Speculation over the new variant is having a chilling effect on consumer confidence and hospitality is the victim – again!

Here we go again, the mad panic response to a new Covid variant. And right in the firing line, as usual, is the hospitality sector which stands to lose big time if consumer fears over Omicron rise amid the verbal tussle over the prospects of a Christmas. Will Santa be banned from FECs, piers and amusements centres? Hopefully, No No No.

It goes without saying that the government faces an unbelievably difficult task in terms of how it responds to speculation regarding new Covid variants threatening our shores.

If it fails to respond quickly and decisively it is subject to intense criticism as it was over the lack lustre performance with the Delta variant but equally it must not be seen to be over reacting. In such situations the government PR machine has to take complete control of its Comms and ensure there is an official party line that has been agreed and is implemented – quite literally to the letter.

Imagine therefore the collective hypertension sweeping through the Number 10 press office when on Tuesday the public health chief Jenny Harries, a regular contributor at Boris Johnson’s press conferences, was telling every media channel that would listen that the public should avoid what she described as ‘unnecessary socialising’ in the run-up to Christmas. No sooner had her advice been digested by company HR departments then the phones at pubs, clubs and restaurants throughout the land rang off the hook as hospitality establishments were submerged by a tsunami of cancellations.

Mike Cherry, boss of the Federation of Small Businesses hit the nail on the head when he said: “As we embark in earnest on this make-or-break festive season, clarity, consistency and proactive promotion of official advice is more important than ever.”

World Health Organisation officials as well as health professionals in South Africa are saying that those diagnosed with Omicron (so far) mostly had no symptoms or only very mild ones with no one as yet hospitalised.

An Israeli cardiologist, Dr Elad Maor who believes that he was infected by the Omicron variant at a medical conference in London last month has described the symptoms as being ’mild’ arguing the new variant did not warrant any further actions.

When Health Secretary Sajid Javid suggested that everyone should take a Covid test before attending a festive gathering or socialising he runs the very real risk of crippling the hospitality sector through cancellations at what should be its busiest time.

How many AGC operators planning in-venue parties to celebrate Christmas with their customers will now be forced to cancel due to lack of interest?

There’s no doubt that the advice provided by Jenny Harries and Sajid Javid will have had a chilling effect on consumer confidence and hastening the prospect of another bleak winter for the hospitality industry.

Finding a way to manage our state of mind …. and the mindless

It’s been a punishing week on the UK psyche as Omicron sucked us into the prospects of a worse pandemic than last year, conversations over not being able to snog at Christmas and masking up kids in all our schools. What has become of us? Time to confront the mindless.

In the space of just four days, we saw the new normal in action. The UK is showing worrying signs of dystopia. When news broke of the Omicron variant late last week, it did actually come with a caveat from a South African doctor who had identified it. Her patients were all young and the symptoms were “unusual but mild”.

But that didn’t stop the floodgates opening: borders were closed, facemasks on, and kneejerk screams in favour of another wave of draconian lockdown measures, cancellation of Christmas, no snogging – and all based on no evidence as yet and dismissive of early reports from those who had witnessed first hand the mild impact of Omicron.

This government is totally to blame for that shift from British reserve to British panic. After two years of turning on the fear factor like a tap – primarily for its own ends – the government has wreaked havoc with our judgement; our default has become panic.

And that’s very different from protection. If we lock the doors every time a variant comes by – which we accept will likely be every few months – we literally will never be able to gain the momentum to protect our futures.

Just like our politics during the Corbyn project, the UK has become extremist – either far left or far right, either shut down or open up, vaxxers or anti-vaxxers…

And the question surely has to be: what happened to the centre viewpoint, reason, careful consideration, balance and, most importantly, context?

We literally are losing our minds….to the mindless.

By mindless, we mean – in the main – having none or little concern for the consequences of what they’re saying or doing.

And of course, some of them have got no minds at all!

The counter-measures implemented last week are frustrating, and they will have an impact on the industry and business in general as it looks to recoup the billions lost during lockdown.

But we must live with them – and if we get our booster jabs, send as many spare vaccines abroad to avoid more global transmissions, we may well be able to continue to bring normality back to our lives – as long as we also do the research into Omicron that enables accurate assessment and facilitates a reasoned response.

But that needs cutting out the crap; the knee-jerk doomsters; the panic responses; and the favour of deception over context.

Balance, evidence and context; that should be the mantra.

Readers of Coinslot will probably know where this line is going because what we’ve seen and heard over the past week – this dystopian behaviour has been played out in our industry for years as we deal with the same deception and knee-jerk responses from our regulator, politicians and anti-gambling fanatics. And it’s the same model: shut us down now, forget the evidence, ignore the context, and offer no room for balance.

It’s a disturbing parallel that runs through a wave of stories in this week’s Coinslot: EAG forced to go into protective mode to reassure visitors; South Tyneside councillors reference tired old arguments to change licensing policies; Martin Burlin’s challenge to the authorities on affordability checks; the Racing Post’s commentary on how a powerful anti-gambling lobby has formed unlikely alliances; the Gambling Commission reviewing its licensing criteria.

That’s an ensemble fashioned by our new dystopian Britain. A trade show having to protect itself following a zealous (over?) reaction to a new variant; a local authority hitching itself to anti-gambling cliches without any evidence; a challenge to a mindless big brother concept that threatens not just the industry but a country’s belief in civil liberties; the emergence of a lobby with prohibition leanings; and a regulator determined to change its guidelines to suit its objectives.

One thing’s for certain, this all does your head in. It really is time to challenge the mindless – they mustn’t be allowed to get away with ignoring the consequences of what they say and what they propose. And we’ve seen what that could do: no snogging at Christmas and no cream cakes for Martin Burlin.

Now that’s what I call dystopian.