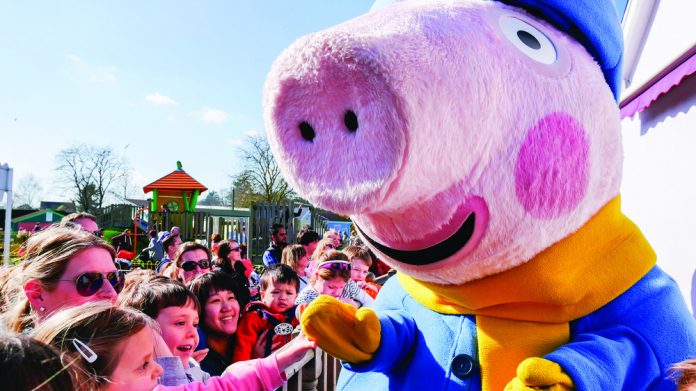 If Boris loses the plot who could be the next incumbent to redecorate the Number 10 flat, why the Commission could be excused for breathing a big sigh of relief and who’s for a trip to the 8th most popular amusement park in the world?

Because every problem is an opportunity you have to ask who’s in the frame to take over from Boris if the Tory knives continue to be sharpened?

The Prime Minister’s chaotic speech to the great and the good at the CBI when he channelled Peppa Pig, compared himself to Moses and imitated the noise of an accelerating car before losing his place for 20-seconds while plaintively murmuring ‘forgive me’ was, if you will excuse the pun(s) a mixture of a ‘pigs ear’ meets a ‘car crash’. Shambolic doesn’t do it justice and his public meltdown was the type of personal crisis associated with someone experiencing a nervous breakdown. When I watched it unfold and saw Boris shuffling through his papers in order to find his place, I couldn’t help but think what type of response would such behaviour have attracted if it had been Sir Keir Starmer or Jeremy Corbyn failing to deliver? As it is, the only responses from the Conservative party have been almost laughable defence and defiance and the much more serious (for Boris) non-attributable murmurings from colleagues worried about holding on to their seats. The sounds from Westminster are those of Tory backbenchers sharpening their knives and members of the cabinet plotting the downfall of their leader. If the Boris Johnson government isn’t in terminal decline it’s certainly acting if it is with rising inflation, tax rises, the migrant crisis, social care, sleaze allegations – the list goes on and on. Of course, Boris won’t step down – he’s got the skin of the rhino – so attention will inevitably turn to his successor. My money is on the Foreign Secretary Liz Truss.

Isn’t it strange how so many politicians with business interests found their way on to the government’s PPE fast lane gravy train?

It was interesting to read in The Times newspaper that Lord Chadlington, who was only recently on a four-person short-list to become chief executive of the Gambling Commission, a role eventually given to ex- Deloitte board member Marcus Boyle, has become embroiled in the PPE contracts skirmish.

According to newly published documents Lord Chadlington, a director of Sumner Group Holdings, recommended one of its subsidiaries, the nursing recruitment agency, SG Recruitment, for government contracts. According to The Times SG Recruitment received two PPE contracts worth £23.9m and £26.1m. Following Freedom of Information requests submitted by The Times it transpires that the person who referred SG Recruitment to the government’s VIP Lane was Lord Chadlington and not his colleague in the upper chamber, Lord Feldman of Elstree as had been previously suggested. Not sure where all of this would have left the Commission and where it leaves his charity Action Against Gambling Harms? Watch this space.

There’s an awful lot more to Paultons Park than Peppa Pig World – in fact it’s the eighth best rated park in the world, according to Tripadvisor

Apart from the Labour Party and other political opponents of Boris Johnson, the only organisation to have watched the PM’s disastrous speech to the CBI over and over will have been the leadership team at Paultons Park, home to the now world renowned Peppa Pig World. Having gushed over his day at the theme park and praising Peppa Pig for its safe streets, discipline in schools, and mass -transit transport system, there can be no doubt that the attraction has and will continue to enjoy the level of exposure that money cannot buy. No surprise therefore that James Mancey, third generation of the founding family, has expressed his delight with the exposure. Having been catapulted into the global news agenda a visit to the website reveals there’s more to Paulton’s Park than just a family of world-famous pigs.

In fact, the Park is the only UK attraction to have been awarded the coveted Tripadvisor Traveller’s Choice award for the UK’s best-rated amusement park for five years running and remains the current holder of the accolade. Perhaps even more impressively, Paultons Park was voted as the eighth best-rated amusement park in the world by Tripadvisor – seeing off competition from a number of so-called corporate entertainment mega-giants. The only question mark surrounding the Park’s new found celebrity is whether a ringing endorsement from a 57-year-old who chooses to do car impressions to a learned gathering of business leaders constitutes a positive endorsement?

At last, HMRC has acknowledged the error of its ways with the Rank Group confirming that it had reached agreement with HM Revenue & Customs on a rebate of £77.5m plus interest due on the claim which is expected to amount to a further £5.5 million. The VAT claim which Rank had taken to court in May 2020 relates to machine income over the period April 2006 through to January 2013. Rank summarised the issue as being ‘whether certain amusement machines were similar to fixed odds betting terminals and online games, which were exempt from VAT during the period.’

Rank challenged the imposition of VAT based on the inconsistency of the exemptions. Whilst on the surface this appears to be a victory for the industry, a few issues come into play which might dampen any celebrations. First of all, both amounts received by Rank will be subject to Corporation Tax. Secondly before anyone starts feeling sorry for HMRC (as if?) the industry has not been able to claim back VAT since 2013.

Thirdly, and perhaps most concerning relates to the adage that ‘revenge is a dish best served cold.’ It’s naïve in the extreme to believe that the revenue is simply going to take this lying down. What are the odds on the industry getting well and truly whacked by a retaliatory tax hike? My money is on a jump in the rate of MGD probably in the next budget. Following the news, Rank shares closed down a penny, or 0.7 percent, to 150p – which might suggest that I’m not alone in my fears?

The government is getting more than a little bullish about the pandemic, but if the summer Covid strategy has been successful it deserves the credit

CAN YOU HERD ME?

Education Secretary Nadhim Zahawi has gone on the record predicting that Britain will be the first big country to beat the pandemic. Heading- off the inevitable criticisms coming his way he swiftly added that he was not being complacent but argued that the government’s strategy was working and that it had been correct to open up and allow high infections throughout the warmer summer months. He added that other countries were seeing Britain as a model of how to deal with Covid- 19, and predicted that we would enjoy “a really good Christmas”. These statements came as Britain declared close to 45,000 new infections a figure 8.4 percent up week-on-week.

The good news behind the raw data is that hospitalisations and deaths are continuing to fall as we continue to implement the booster programme. But as you look across Europe you have to say that we’ve got an awful long way to go and that we are not out of the woods yet. However, if the government does succeed in navigating a passage out of the pandemic it will deserve all the plaudits simply for having the nerve to stick to its summer strategy.