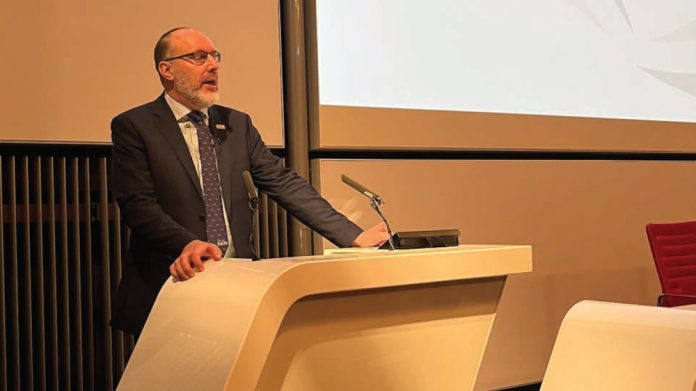 AGCs and FECs cannot only live in perfect harmony, they are inter-linked and dependent on one another, according Bacta CEO John White, who called for industry unity as the association campaigns for fairer regulation in the government’s gambling review.

Bacta CEO John White delivered an impassioned speech at Bacta’s AGM on 25 November calling on the industry to gather its forces in unity as it steps up the campaign to secure a fair and progressive review of gambling legislation which is currently reaching a conclusion at the DCMS.

White made the call at the association’s first assembly since 2019, arguing that the government cannot do anything if the industry does not lobby from a single position.

“We must remember, Bacta is made up of many businesses large and small sitting across a £2 billion industry employing tens of thousands of people. Ensuring we can deliver for all of you, as we have done in the past, remains my central and over-riding motive for doing what I do. And no other organisation has the reputation, reach, skill set and resources to do so,” he stated.

“Being an effective organisation, an effective industry, requires all its component parts to come together and to thrash out a common line. It can be difficult, but without a single position, government can’t do anything. It can’t favour one part of the industry over another – we were told that explicitly at the last gambling review. Government having cut the FOBT stake to £2 for which we had campaigned so hard, was not going to give us the concessions we had asked for at the same time, no matter how modest. And government can’t agree to do something if the industry is not agreed upon it. It’s the first rule of political lobbying. That’s why successful industries are fully representative of their sector, have one voice and a clear programme, alongside all the skills and resources that we are lucky to have at Bacta. It is our strength and gives me optimism for the gambling review.”

White was acutely aware of the imbalance in recovery for his constituent membership and the difficulties that brings to the sector. Whilst the seaside has enjoyed a buoyant return to action, the high street AGCs and the supply chain are both finding the recovery a much bumpier road.

He highlighted that the trade association will be spending more time on AGC work, including a dedicated AGC campaign, and the launch of a ‘high street hero’ award as part of its new awards intuitive.

“You might ask why we are we emphasising AGCs having spent millions of pounds and thousands of hours fighting for the AGC sector to achieve the £2 stake cut,” said White, who then gave his answer: “Because all parts of industry matter. They are inter-linked. Not only do many other parts of industry have AGCs on their premises, many companies operate across the piece.”

He is right in that statement, of course, but both within and between the lines of his speech at this year’s AGM, the Bacta chief recognised the challenges across the wide reach of the Bacta family. “Breaking that link, that association with amusements leaves the AGC exposed to unfounded criticism and vice-versa,” he said. But some, he concedes, are harder hit than others at the moment. “It is also the case that the AGC sector is the most tightly controlled of our sectors and some of those controls are unnecessary and anachronistic.”

And that is something that must be addressed.