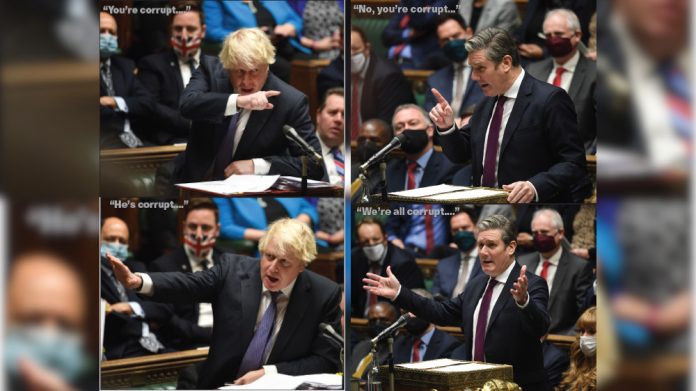 Corruption, Westminster sleaze, the booster vaccination and Basil Fawlty all come under the microscope in this week’s edition of Off the Record

When it comes to the decisions of big business all you have to do is follow the money!

BREXIT OR TAX IT?

The decision taken by Shell to move its headquarters from the Hauge to London and in the process for it to drop the words ‘Royal Dutch’ from its name have caused more than a ripple of discontent and anger on behalf of the Dutch government and other businesses in the Netherlands. Brexiteers are also using it as something of a two fingered salute to those doom mongers who said that leaving the European Union would result in a stampede of businesses away from Britain and into the arms of our friends in Europe. However, everything is not exactly how it might appear to be on the surface at least. One theory suggests the decision may have been prompted by the Dutch government’s decision not to abolish a dividend tax the likes of which does not exist in Britain.

The Dutch government has said that it will address the tax concerns in parliament and if there’s support for scrapping it the caretaker government, which has come under intense pressure for flip flopping on its lockdown strategy, will make a screeching U-turn and commit to legislate when a new cabinet is formed. But behind all of the posturing and intrigue perhaps the real reason behind the proposed relocation lies in May’s Dutch court ruling that would force the company to cut carbon dioxide emissions by 45 percent within nine years, the first time that a specific company has been targeted by legislation. As with most commercial conundrums the simple rule is to follow the money!

WHAT HAVE THE WOKES EVER DONE FOR US?

Despite wanting to avoid the grumpy old man tag I find it impossible to be anything but utterly contemptuous of so called Woke Culture. Having taken the high and mighty decision to draw up a blacklist of barred speakers at their debating society after banning an art historian for impersonating Adolf Hitler the Cambridge Union found that the jack boot was on the other foot. John Cleese, who studied at Cambridge, took the unilateral step of blacklisting himself from any Cambridge University event because he had impersonated Hitler not once but twice – firstly in a 1969 Monty Python sketch and more recently as Basil Fawlty in Fawlty Towers. Cleese issued a public apology on Twitter asking if anyone could find an alternative venue where ‘woke rules didn’t apply.’

I honestly feel that Woke culture is one of the biggest and most insidious threats to modern society. No one wants to go around seeking confrontation and upsetting people but FFS! However, in a piece of remotely positive news it’s good to report that at least the Harry Enfield Scouse impersonation has been cleared by the woke police as not being racist – I kid you not!

IN NEED OF A BOOST

All adults are increasingly likely to be offered booster jabs which has to be the way forward if we are to tame the Covid virus and hasten the return to a normal life. The data shows that so called third doses cut the risk of infection by a whopping 80 percent. It’s not that often that I find myself agreeing with the Prime Minister on many issues but on this occasion even his most determined critic would have to concur with his view that booster jabs were ‘absolutely crucial’ to provide the level of protection that we need over the winter and with that to head-off the danger of more restrictive measures being introduced, measures which will undermine quality of life and lead to restrictions on how we are allowed to do business.

So far nearly 13 million people across the UK have had a booster which leaves millions of eligible over-50s yet to come forward. One thing that I’ve found is that unlike the initial vaccination programme the booster campaign is not as well orchestrated both in terms of organisation and communication. Much more is being left up to the individual which may explain why the programme is yet to gather momentum.

It would be a total disaster if people who have been double jabbed were left to suffer because they had failed to top-up their immunity. The UK continues to slip down the international league table for vaccinations with 74.4 percent having had at least one vaccine dose a figure that’s below that of much criticised Brazil and Australia (both 75.9 percent). The message for both the government and the population at large has to be ‘must do better’.

Hats off to the furlough scheme, it’s helped secure many thousands of businesses including mine

IN PRAISE OF FURLOUGH

I have said it before but the government’s furlough scheme will go down in history as one of the most influential and important interventions made by any administration in living memory. Mine and thousands of other businesses would have found themselves in a very uncomfortable place without furlough – that’s for sure. Now the data exists to back-up that sentiment. Despite the end of furlough, the number of people in work rose by 160,000. There had been fears that the withdrawal of the scheme – which cost an eye watering £70 billion – would trigger a wave of job losses. The ONS figures actually showed that employment increased to 29.3 million and that unemployment fell to 3.9 percent a figure that’s lower than prior to the Pandemic. And if £70 billion sounds like an awful lot of money compare and contrast its value compared to the £37 billion swallowed up Dido Harding’s Test and Trace programme for which there is not a shred of evidence to suggest that it made any measurable difference to stem or delay the progress of the pandemic.

It was a shame that so much of Boris Johnson’s time at the Cop26 summit in Glasgow was taken up by a stuttering and shambolic defence of the moral code of our elected representatives. Boris had to argue that ‘ours is not a corrupt country’ but I’m afraid he’s wrong. Britain is as corrupt as virtually anywhere else in the world. We might kid ourselves that because the protagonists aren’t shady characters wearing dark glasses that everything is above board. But you just have to look at Westminster where the accusations of sleaze continue to mount. It’s far from a good look when the PM is forced to insist in front of a worldwide audience that the UK and its institutions are as clean as a whistle when the focus should have been on clean air and protecting the environment.

I would say the only difference between the UK and other countries is that our preferred form of corruption is in the main conducted by people wearing collar and tie.