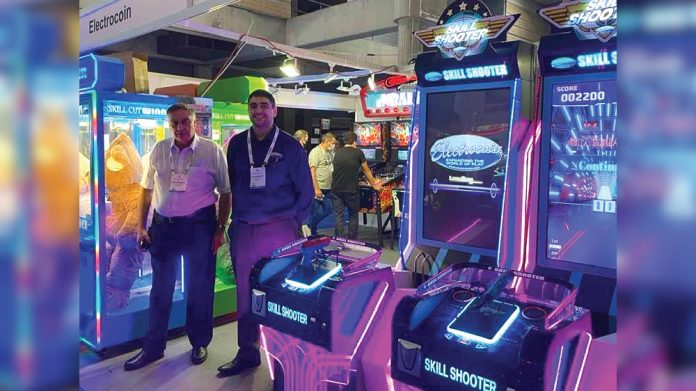 There’s a real buzz around Electrocoin at the moment as the company makes its mark in the redemption sector with its current market leader Skill Shooter. John Stergides sr talks to Coinslot about the company’s latest delivery of machines and why the industry veteran is on the pioneering trail once again.

Electrocoin took delivery of a new order of Skill Shooters at the weekend, cause for huge celebration in the context of the transportation problems besetting every industry at the moment.

A new order, in fairness, is stretching it a bit for Coinslot. The order was actually booked in March; the machines were finally shipped from China on 28 July; and unloaded at Felixstowe – eventually – last week.

In the current climate, eight month production and delivery and a six fold increase in the shipping cost, can be considered pretty fair going.

And veteran John Stergides sr is stoic but satisfied with that.

The first to call out the transportation crisis – as early as last new year’s celebrations – Stergides has been warning his industry colleagues about the choppy waters ahead – get your orders in now, he kept reiterating at every opportunity.

And that he did too. The weekend order had barely been offloaded before the Skill Shooters were out on the road to customers.

There are two more containers en route: “They passed customs at the end of August and we’re hoping for delivery early December,” he said, with – of course – the almost statutory caveat: “though you can never be certain!”

But he knows: he’s paid an extra charge just to make sure his customers get their machines quickly, and he has used all his skill-set to get these Skill Shooters into the UK market. He’s tracked back, assessed the transportation trends, kept regular contact with drivers and hauliers. An order today, he calculates, will arrive February-March – a two week Chinese national holiday, Felixstowe empty containers policy, speedy delivery surcharges willing.

No stone can be left unturned in the analysis of getting your products into the UK under the new normal. You’d think the transportation issues would dampen the spirits. But not Stergides; he’s as enthusiastic as he was back in the Bar X days.

“We’ve sold all our machines until February,” which is why he was on the phone just before we called booking another run.

“I’ve ordered another 48 machines which will get here in plenty of time for the new season. We’ve obviously got to plan around things like the two week holiday in China etc – it’s a science ordering machines at the moment!”

But it’s a science that Stergides is mastering – again. In its heady days in the 80s and 90s, Electrocoin was manufacturing gaming machines at an 80-20 split. Electrocoin were royalty in the arcades. Now, the company has been channelling energies into redemption, and Stergides is loving it.

“We’re really focused on redemption at the moment – it’s been a huge success for us. And Skill Shooter is the latest line of some really strong machines.”

In fact, so strong Stergides believes Skill Cut Winner and Skill Shooter are the “number one and number two best games for many, many years.”

And if there’s anyone who knows a top game, it’s John Stergides sr. “Electrocoin are back to full speed now,” he explained. “We’ve had to work really hard, but there’s a lot of optimism returning to the industry. We’ve got 20 different projects that we’re currently working on and there are some really exciting opportunities ahead.”

And you couldn’t argue with that especially as the ebullient Stergides seemed so excited with work that he’d left his car keys in the engine to get the new Skill Shooter orders in before talking to us.

A kind passer by popped into the showroom whilst John Stergides sr was on the phone to let him know about the car keys – but before the Electrocoin MD left to resolve his own transportation issue, he was quick to note: “At times like this, the industry always wants a machine that will deliver. Skill Shooter is drawing in the income and the families love it. That’s exactly what’s needed. We’re doing everything to get those machines here because they will be part of the industry’s revival.”

And now that car….