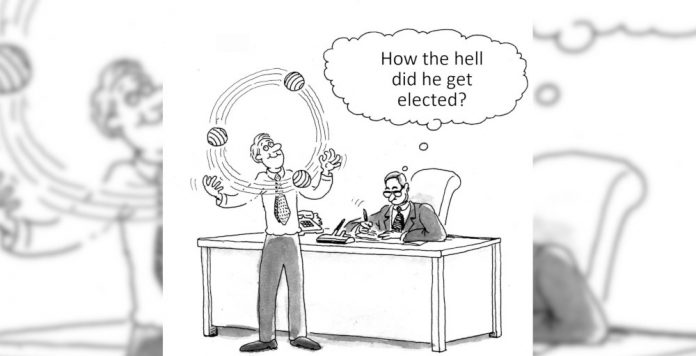 The conveyor belt of Gambling Commission chief executives has churned out yet another bully – it must be part of the job description. Andrew Rhodes has this week told the industry it’s not doing anywhere near enough on social responsibility – it may be a new face, but it’s the same old words. Bullying is part of the Gambling Commission’s DNA.

The Gambling Commission’s interim chief executive Andrew Rhodes this week slammed the gaming and gambling industry for not doing enough on social responsibility.

“We want a constructive relationship with industry,” he said in the wash up to Safer Gambling Week. “But it must be on the basis of compliance and for all the good efforts made, we still see too many instances of things that everyone agrees are things we should not be seeing. These things are not historic – they are happening now.”

And that has to be addressed in the Gambling Review.

The arrival of Andrew Rhodes as interim chief executive is proving to be as enlightening in its disappointment as it is in the vacuum of ability at the commission itself.

It is a body out of depth as much as it is out of its mind.

We know that problem gambling rates are at a historic low of 0.3 percent – but you would never think that given the tone and inference in Rhodes’ comments.

It’s a body in a state of denial – denying its own evidence that states problem gambling rates have halved.

But it’s a body that also denies it has its own issues.

If Andrew Rhodes placed as much emphasis on the Commission’s administrative duties – he’d be beating himself to a pulp.

The Commission is failing the industry badly in terms of managing licence applications and fulfilling the technical duties that it’s there to do.

There are dozens of applications way over the agreed deadline; there is inefficiency; poor quality of staff; tardy management and a lot of contempt.

Get your own house in order Mr Rhodes. That’s what your job is. Get licence applications out in time; sort out the unnecessary bureaucratic obstacles; start meeting your own criteria instead of attacking the industry about their missteps.

The Gambling Commission is not fit for purpose – the APPG for Betting and Gaming is fast recognising that from the number of complaints it is receiving about the GC from stakeholders.

The only public words we ever hear from the regulator are those that sound like a sermon from the church pulpit.

But one lesson Andrew Rhodes should learn is that he’s not there to deliver pious words. He’s there to do a regulatory job. And that means doing the work that facilitates the machinery of the industry properly.

If it wants a constructive relationship with the industry, it needs to cut the verbal crap and get back to the office and sort out the desk work because it’s pretty poor at that.

It’s about time the Commission addressed the fact that there is a problem in this industry – and that this particular Commission is the actual problem.

Scare-mongering and warnings for effect are having a damaging impact on business and consumer confidence. Terror tactics are back on the table.

One thing that we have all learned over the last 20- months of Covid is that the way in which people in positions of power and influence quote statistics can have a profound impact on how we behave.

Sometimes the misuse of ‘facts’ is deliberate and calculating and on other occasions it’s a simple but nonetheless serious error. The latest example has seen the health secretary Sajid Javid warn the NHS to be quote ‘careful’ with its use of Coronavirus statistics in particular the exaggeration meets misreporting of patient numbers.

The person in the cross-hairs is none other than NHS chief executive Amanda Pritchard who went public with her claims that hospitals have had 14-times more Covid-19 admissions than at this time 12-months ago.

A startling figure – if, that is, it was accurate. Far from the 14 times multiple quoted, the official data shows the number in hospital with Covid in England totalled 7,075 compared to 11,680 on the corresponding date in 2020.

While the confetti of figures being thrown about is often an issue of number semantics the really serious outcomes are when they help to fashion and entrench behaviour.

Of course, the main victim is the individual and how that impacts his/her mental wellbeing.

But when people are scared to death (sometimes literally) about venturing outside their home it also has a damaging impact on the local economy and in particular the vitality of the high street.

Evidence of that happening has come from influential PubCo JD Wetherspoon. In its first quarter trading update, the company, which is a barometer for the high street, stated that older drinkers were returning to pubs more slowly than its younger customers due to the continuing caution over the prevalence of Covid and the perceived risks of contracting it in indoor spaces.

While the sale of drinks usually favoured by younger demographics such as cocktails rose by 45 percent those normally the preserve of older drinkers such as Stout and traditional ales fell by 20 percent and 30 percent respectively.

Tim Martin’s response to wooing the older demographic back into his pubs has been an eye-catching programme of discounting with fish chips and a soft drink being offered at just £3.99.

However, not all hospitality businesses have the financial muscle to do this and the implications of using misleading stats or data that’s just plain wrong can have devastating consequences for the individual and for the business community.