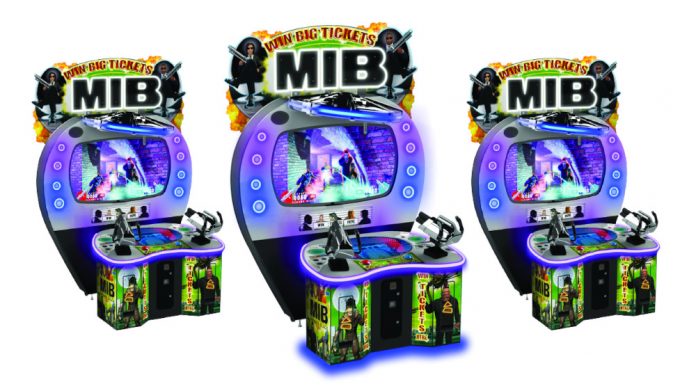 Sega Amusements International will seize the opportunity of IAAPA 2021 to launch its new Men in Black video redemption game, a “must have” title based on the Sony Pictures franchise.

Sega Amusements International has announced the launch of a new licensed skill-based video redemption game based on the Sony Pictures franchise Men in Black, with the “retro-futuristic cabinet” set to be unveiled at IAAPA 2021.

The Men in Black title, released for the very first time as a coin-operated arcade game, features “iconic aliens, weapons and locations” from the franchise, and will take centre stage at the Orlando trade expo from 16 to 19 November.

“We are thrilled to bring the energy, excitement and humour of this fantastic franchise to life in a video redemption game,” said CEO Paul Williams.

“Men in Black is perfect for the current market and testing has shown that the brand is a powerful attraction for players of all ages.” “Men in Black is a ‘must have’ game for operators looking to entice new visitors in 2022 and beyond.”

“The gameplay is an instant hit, as players take on the roles of Agent N and Agent V to protect our world from evil aliens to win tickets,” said Sega. “Players are immersed in thrilling action right from the start, powerful special weapons picked up during the mission help them stay alive and defeat the final boss.”

“Players who score over 1000 points will win the ticket “Super Bonus.” Multiple locations and scenarios are designed to keep players coming back for more. Missions, routes, enemies and bosses change every time you play, thus creating a challenging yet fun gameplay experience that excites players every time.”