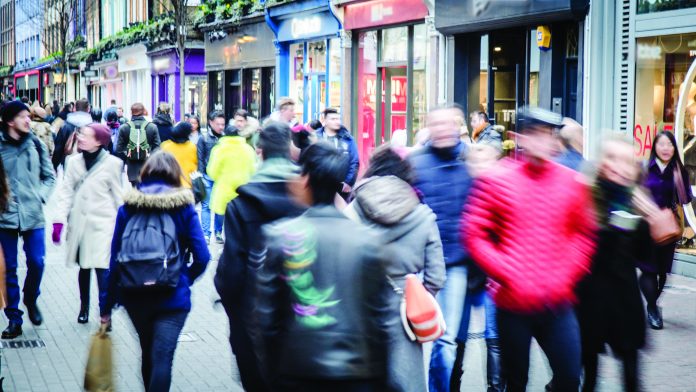 Confident consumers are back on the high street spending ahead of Christmas although fears mount of inflationary price rises.

On a 2-year basis, total retail sales grew 6.3 percent during October compared with the same month in 2019.

Commenting on the headline figures, Helen Dickinson OBE, Chief Executive of the British Retail Consortium, said: “Customer demand is getting back on track ahead of Christmas as sales grew at a faster rate than the month prior, and well above its pre-pandemic levels. Some people started their Christmas shopping early. Retailers are hopeful that demand will continue right through the golden quarter, however, there are challenges ahead with higher prices on the horizon compounded by the many increasing costs faced by consumers such as higher energy bills and rising national insurance.”

“The much-reported squeeze on household spending has yet to materialise as consumers seem happy to carry on shopping. Limited availability of stock has created strong pricing dynamics, which means we are unlikely to see any big discounting this Christmas, and many retailers will be hoping consumers are willing to buy the most sought after gifts at any price. With rising costs putting a strain on most retailers, they will be placing all hopes that demand remains strong as consumers plan for a bumper Christmas, shopping early for those much wanted gifts and spending more than last year when Christmas gatherings were cancelled. The main concern is now how trade will develop post-Christmas into 2022.“

Susan Barratt, CEO at IGD, confirmed: “Our Shopper- Vista research reveals 28 percent of shoppers now expect food to get much more expensive in the year ahead, the highest level recorded, with increasing numbers signalling that rising food, energy and petrol prices are having an impact. Helping shoppers navigate through rising prices while also addressing environmental concerns will be a key challenge.”