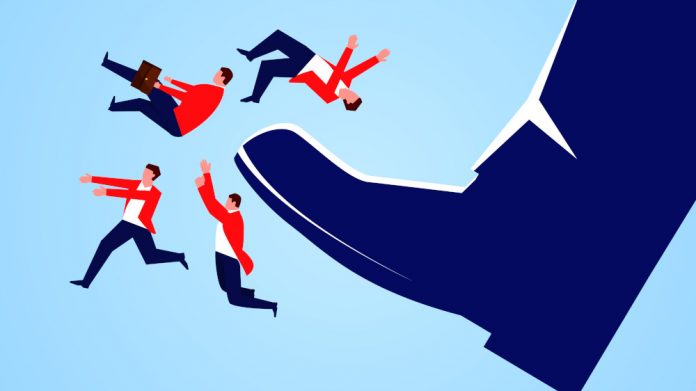 Coinslot’s outspoken Arcadian takes a look at the decline in Anglo/French relations, asks isn’t it time the Gambling Commission takes a long hard look at itself and laments the ‘do what I say’ not ‘do what I do’ attitude of the world leaders and mega names flying into Glasgow on their private jets.

No one likes a bully just ask the Gambling Commission!

WALK A MILE IN OUR SHOES

Last week’s edition of Coinslot reported on the evidence that’s been supplied to the APPG for betting and gaming suggesting that the Gambling Commission – our regulator, is both ‘incompetent’ and that it acts like a ‘bully’.

I have to say that on both of these counts I agree and would add to that charge list arrogant, distant and unprofessional.

The Commission has lost its way and I can’t remember a time when the relationship (I use the term extremely loosely) has been any worse than it is now.

There’s no leadership, no vision, no direction and no sense of what the industry is all about. I think there’s a big cultural divide and one that if it’s not fixed does not augur at all well.

We need to have a regulator that understands the business and whose motivation is to see the industry flourish providing it upholds the tenets of the Act to protect the vulnerable, be open and fair and to keep crime out.

I think that our sector is ticking a large number of boxes but you wouldn’t believe it by the tone the GC adopts which at best can be described as ‘head masterly’.

Scott Benton MP, one of the parliamentary architects of the APPG investigation said he has been shocked by the sheer scale and severity of evidence that had been submitted and by what he described as the ‘abject terror’ the industry has of recriminations on the part of the regulator.

All I can suggest to Mr Benton – is to walk a mile in our shoes – at the same time as trying to run a business that’s being ravaged by spiralling costs, a labour shortage and stake and prize levels that are so behind inflation that it’s laughable.

Isn’t it about time the industry took a small amount of credit for decline in the problem gambling figures?

TURNING SUCCESS INTO A FAILURE

The rate of problem gambling has dropped to an all time low of 0.3 percent – a success story that probably deserves more credit, particularly so during Safer Gambling Week.

I think our industry has done an awful lot to mitigate the harmful impact that gambling has on such a small percentage of the population.

AGC operators live the know your customer philosophy and probably know more about their customers their likes and dislikes than virtually any other retailer on the high street including pubs.

Organisations such as YGAM and GamCare have also done an awful lot in this field with the emphasis on education rather than punitive regulation.

After what virtually everyone described as being a hugely successful ACOS – myself included – I think that we are on course for a really outstanding edition of EAG in January.

I always felt that was going to be the case but the mood and sense of optimism that resonated around ACOS has only confirmed that view.

The mood music is so positive and the industry is so hungry for product that I’m going to stick my neck out and predict the best EAG for business written on record.

The ironic thing is that Bacta is subsidising the costs of stands to a greater degree than ever before – but I don’t think the manufacturers will actually need any support such is the need and desire to invest.

Professor Sir Andrew Pollard, co-creator of the Oxford vaccine has come out with a perfectly reasonable argument to explain the UK’s high infection rate. The UK is reporting circa 40,000 – 50,000 cases of Covid every day, the highest raw number of cases and the highest case rate per million people in western Europe. But the point made by Sir Andrew is the super high volume testing campaign.

In fact, the UK tests its population far more than its European neighbours, conducting 13 tests per 10,000 people, a figure that’s twice as many as France and ten times that of Germany.

Addressing the Commons science and technology committee he said that when you took the disparity in testing into account the UK could no longer be regarded as a rogue nation but was in among the pack. He pointed out that Germany had a positive test rate equivalent to one for every 12 tests conducted compared to the UK figure of one in 20. The problem with our high infection rate is that it gives the international community a skewed view of what’s happening here and it’s putting people off visiting.

The simple fact is the more you test the more infections will be detected.

The dispute between France and Britain over fishing rights continues to dominate the headlines to such an extent that you tend to think that it’s a bit of chest thumping on behalf of Macron and Johnson and a way of deflecting attention from their own domestic issues.

French fishermen have been caught allegedly ‘fibbing’ on applications to work in British waters with UK officials apparently turning to high spec satellite data to directly contradict claims by French fishermen that they had previously fished off the coast of Britain.

EU fishing vessels must show that they operated in British waters between 2012 and 2016 before they can be granted a licence and France is arguing that many of its small trawlers, those under 12 metres in length, were not equipped with GPS trackers and could not easily prove their whereabouts.

The mutual distrust can be summarised as the Brits suspecting the French boats of trying to slip through the net (sic) and take advantage of the post- Brexit disruption – with the French pointing out that its’ only their vessels that are being picked on.

So far, 16 small French vessels out of 47 applications have been licensed to fish in Britain’s six-mile zone. France has said it will hold off on threats to disrupt trade, and interrupt the power supply to Jersey – for the time being at least. However, the question remains that if the French authorities can identify a small fishing vessel off the coast of Kent how come they find it so difficult to pick-up the hundreds of boats crossing the channel from French shores every day?

The Climate change conference taking place in Glasgow got me thinking about what we do as a business and as a sector to help the environment. Although you don’t hear a lot of discussions about the environment within the industry, I think AGCs are probably among the cleanest retailers on the high street. We don’t really generate much waste and single use plastics aren’t a feature within an AGC. There are also some quite stringent rules and regulations that have to be adhered to when it comes to machine manufacturing. While it’s not possible to power our business using solar or wind, I think our green credentials eclipse those of the delegates who flew into Glasgow on over 400 private jets causing a traffic jam that forced empty planes to fly 30 miles to find a space to park. Super ironic when you consider that one of the core messages coming from the talks is that we should all fly less to try and cut down on emissions!