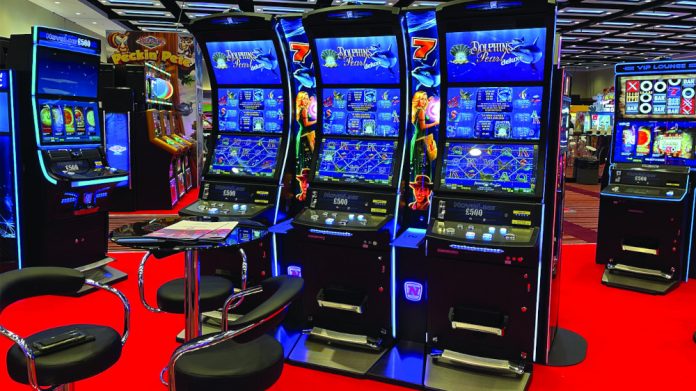 Novomatic Gaming UK returned to ACOS with a bang, launching its new cabinet Thaumic, new titles for its two Magic Games HD Premium packs and the NovoLine B3 platform, and cash handling solutions including the NOVO CASH X6 and the implementation of the OKTO virtual wallet, which has been seamlessly integrated into the NovoLine B3 product range. With so much on offer at the Novomatic stand, Kevin Temple, director of sales at NGUK, described the reaction from customers as “phenomenal”.

Coinslot: How did the show go for you – was there good footfall and business done?

Kevin Temple, director of sales at Novomatic Gaming UK: As a whole we were really pleased with the Autumn Coin-Op Show. The set up was smooth and the new venue was great, it was a fantastic introductory show to get ourselves back in the swing of things after a long time of not being able to contribute to face-to-face exhibitions.

We had a great flow of footfall on our stand which was fantastic, especially on the first day. We showcased all of our brand-new products at ACOS and received some great feedback from our new and existing customers.

Our new cabinet the Thaumic was met with a great deal of attention from customers which in turn has translated to sales on a range of our products. The mood for investment was good from customers, with many having used the last 18 months to re-design their venues and re-evaluate their player offering.

Coinslot: What were highlights on Novomatic’s ACOS stand? Which products caught the attention of attendees?

Kevin Temple: The highlight of ACOS was definitely being able to interact with our loyal customers in a face-to-face environment, we haven’t been able to do this since before the pandemic at the ICE Totally Gaming Exhibition, so it was a breath of fresh air to have a presence at the show.

We displayed all of latest products at ACOS including a new cabinet for both arcade and bingo as well as our new Magic Games HD Premium game packs, both of which have received substantial upgrades!

The Magic Games Premium HD B3 game pack has received 11 brand new games such as, Knights Valour and Eye of the Queen as well as 5 ‘Royal’ games which incorporate the latest from NOVOMATIC Gaming technologies, ‘Lock N Spin’ feature. The Magic Games Premium HD CAT C game pack also received a plethora of new titles such as Go for Gold and Go for Coins. We also unveiled for the very first time our state-of-the-art Thaumic cabinet and supporting signage. All of which were met with applause and excitement from our customers which have come to know the level of finesse and technology from the NOVOMATIC group of companies.

The stand also featured the Panthera and VIP Lounge cabinets which are synonymous with the AGC market as well as our range of CAT D Mini Slots which have multiple themes. There was a lot of interest regarding the game launches on NovoLine B3 platform which is becoming increasingly popular with venues due to the success which they have within casinos and the B1 market.

The NovoLine B3 games include already popular casino titles such as CASH CONNECTION Charming Lady and Apollo God of the Sun which have been fully optimised for B3. We also demonstrated multiple cash solutions, including the NOVO CASH X6 terminal as well as the OKTO virtual wallet which has been seamlessly integrated into our NovoLine B3 product range. Overall, the reaction was phenomenal and customers were really excited about the new cabinet, games and technology which will enhance our already solid platform in the AGC market.

Coinslot: It was the industry’s first UK gathering for over 20 months – how did you gauge the mood and what were the main talking points?

Kevin Temple: It was surprising how many people attended ACOS it was far more than expected given the circumstances, the mood was high and people were really enthusiastic about the industry after a great 5 months of being able to trade again.

NGUK were really happy with the attention the stand received, there was a real buzz of social activity felt throughout the show. Main talking points were the new products that we were exhibiting, the gambling review, the buoyant market place, future investment, the enhancement of digital technology and the evolving aesthetics of the current digital offering which was very positive.

Coinslot: The industry is clearly happy to be back at live events, what’s on the agenda for you between now and the next UK expo at EAG in terms of new products and new projects?

Kevin Temple: Our main priorities going forward from the Autumn Coin-Op Show are ensuring that we satisfy the demand for the orders made at ACOS and continue to progress developments on the Magic Games Premium HD and NovoLine B3 platforms.

EAG is the next main event in our calendar, our goal is to ensure that we achieve our vision and that we have an equally successful show in January. We thoroughly enjoyed ACOS at the new venue the ILEC Conference Centre and NOVOMATIC Gaming UK would like to take this opportunity to thank all of their customers, colleagues and partners who supported the stand at the exhibition and made it such a success.