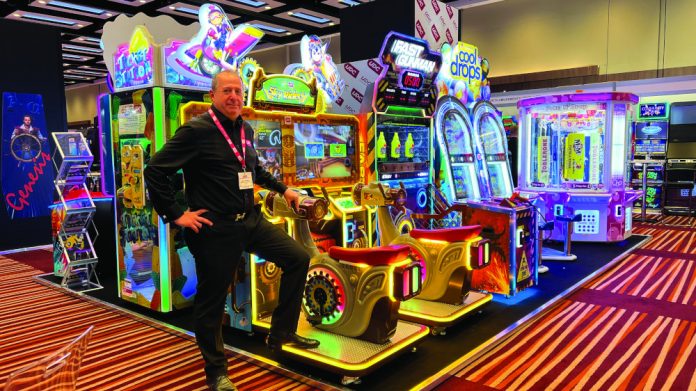 Reeling in the orders at one of the busiest ACOS’s on record, London-based supplier UDC showcased Pearl Fishery, Nitro Speed and Sky Riders at its stand in the ILEC Conference Centre, with sales director Jonathan Lauder noting that operators have been keen to secure their new investments ahead of what’s expected to be a strong 2022 season.

Pearl Fishery, Nitro Speed and Sky Riders were the stars of the show on UDC’s ACOS stand, with operators more eager to get their orders in early in preparation for next season.

With one highly successful summer under its belt, Pearl Fishery was particularly sought after, with UDC’s new Ticket Station also capturing interest with its option for half-size redemption tickets.

“As usual, UDC had a stand packed with games, with the stars of the show for us being Pearl Fishery, Nitro Speed and Sky Riders which were all warmly received by visitors. Pearl Fishery, has been exceptionally popular, with talk between operators of how well it performed for those lucky enough to get one of the first batch of machines this summer. It’s not just in the UK, it’s been a smash overseas as well. We also demonstrated the new Ticket Station working with our Half-Size redemption tickets working with barcode security and receipts with custom graphics which was of interest to a large number of customers,” explained Jonathan Lauder, UDC sales director. “We took many orders for machines at the show in readiness for next year. With the supply chain issues that have plagued 2020 and 2021 many switched-on operators are keen to get their orders in early to avoid issues. We’ve been recommending that companies order well before EAG wherever possible.”

ACOS 2021 was the busiest UDC had ever seen it, with Lauder attributing the crowds to the long gap between the last industry gathering at EAG 2020.

“There’s been a real pent-up demand for a chance to get together, catch up with old friends and see what the market has to offer,” he said. “UDC had an excellent show with lots of interest meaning we were rushed off of our feet for the first day and still busy enough on the second day that when it was home time we were still chatting with customers.”

The night out in London’s West End was equally popular, remarked Lauder, who expects and equally strong attendance at EAG in January, where UDC will have even more new products on offer.

“We’ve a whole host of new product lined up for EAG 2022, some of which are still under wraps,” he revealed. “Preparations are underway and the pressure is on to get everything delivered in time for the show in January.”

Between now and then, UDC will exhibit at the Family Attraction Expo at NEC Birmingham, attend the BACTA Convention in November, and continue to do its bit for the BACTA Parliamentary reception by supplying machines for demonstration purposes.