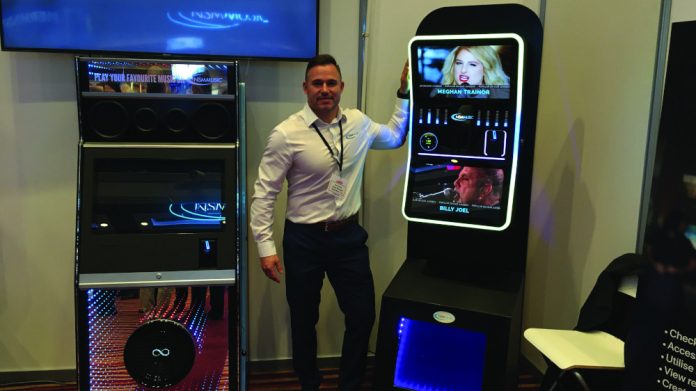 Despite a prolonged trade-show hiatus, NSM Music fell quickly back into the rhythm at ACOS 2021, with sales manager Alex Kirby stating from day one that “it was a fantastic show.”

NSM Music’s impressive collection of jukeboxes clearly proved music to customers’ ears at ACOS 2021, with the Lightning, Thunder and Infinity all making waves alongside the most recent release; the Curve.

However, though the positive response to the machines was no surprise to the Leeds-based manufacturer, sales manager Alex Kirby confessed that the overall customer response to the first UK expo in 20 months came as more of a shock.

“I thought it was going to be an absolute flop,” said Kirby. “It was the school holidays, and from speaking to a few customers they just weren’t comfortable going to London till maybe next year.”

“But if we’d have closed the stand down at noon on the first day it would have still been viable for us, it was a fantastic show.”

Though customers were primarily drawn to the new features of the Curve, on show for the first time since its launch at EAG 2020, the Thunder, Lightning and Infinity also made a considerable impression on operators, with Kirby noting “sales were very fluent, very good.”

“People mainly wanted to catch up and find out where we were after lockdown, what products we had, what we were offering. We had a couple of new apps which we were showing as well.”

“The main talking point obviously is sites, pubs, getting back to normal after lockdown, we hope that’ll continue. We got a lot of good news from customers, saying sites are doing very well – overall it was positive news. Then the talk was that it was nice to get back to a bit of normality.”

With NSM now focused on “looking after customers’ needs” post-show, the importance of a strong relationship for the firm between brand and buyer is clear, with Kirby adding “we need to thank all the customers for coming to see us.”

“It’s ok us going to the shows, and having the expense and pushing ourselves out there to do it, but if it wasn’t for the operators coming it would’ve been absolutely pointless.”

“It was because of them that we had such a good show, made it viable, and the reason why we’ll