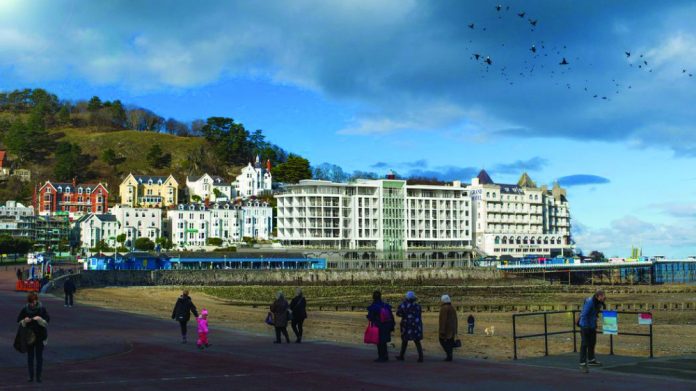 Is there a reprieve in the making for Llandudno Pier as it battles to overturn an apartment development opposite its front entrance? If so, it’s coming from unexpected places; the current owner of the proposed 54 apartment block. Is that the sound of a towel being thrown in or an early cash out on the development?

Llandudno councillors have expressed their “surprise” that the proposed site of a controversial £20m development on the town’s seafront is to be put up for sale, despite awaiting final word on the future of the application from the Welsh government.

The former Pavilion plot will be auctioned by property agency Allsop on 9 November, despite owner Alan Waldron having secured consent to build 54 apartments from local planners in 2018 – a decision now opposed by a 1,700-signature petition.

“I am shocked to see the land on the market,” said Senedd member for Aberconwy Janet Finch-Saunders. “It is a bizarre turn of events, especially bearing in mind that we are awaiting the outcome of the call in.”

“There is complete uncertainty with the planning application, and as such I am surprised that the property has been placed on the market before the Welsh Government’s minister for climate change has made a decision.”

The planning approval by Conwy Council was referred to the government in June after local opposition, with Llandudno Pier owner Adam Williams predicting that the ten-storey residential development could force the Grade II-listed landmark to “close its gates for good.”

Opponents of the development will hold a protest on 7 November at Llandudno North Shore Bandstand, in order to ensure the potential new owner is aware of the situation.

It would, however, be a surprise if the present owner was still unaware of the opposition to his development in the resort.

Pier owner Adam Williams has already signalled that the development would sound the death knell for the pier and local residents continue to vocalise their resistance on a regular basis.

With Llandudno enjoying a significant uptick in its popularity this year, the residential development will be viewed as a lost asset by the town which could be trading 54 second home apartments for a 135-year old tourist magnet in the shape of the pier.

What remains to be seen is whether the current owner has thrown in the towel on his development, on the assumption that planning will be overturned by the Welsh government, or that he’s cashing in early. Now that is the £2.8 million question.