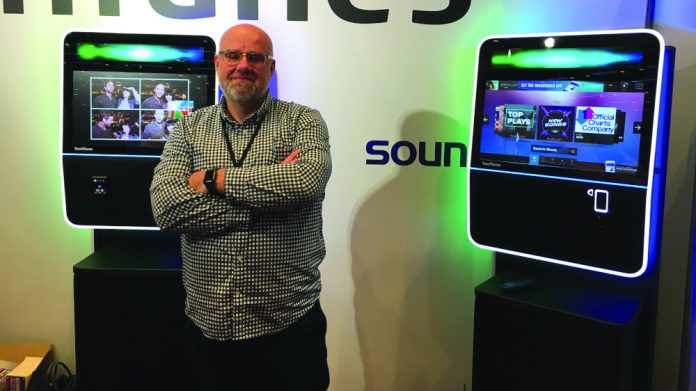 The Angelina jukebox continued to make a mark for Soundnet/Touchtunes at ACOS this year, with an order for 100 of the high-spec models signed during the two-day event.

Soundnet/Touchtunes is celebrating a landmark ACOS, after agreeing a deal with gaming, music and pool equipment supplier Amusement Leisure for 100 Angelina digital jukeboxes.

Despite describing the order as “incredible,” Soundnet sales and marketing director Toby Hoyte revealed the agreement is the latest in a series of significant orders from the company.

“Paul’s business has grown massively over the last couple of years and Soundnet/TouchTunes is proud to have been on this journey with them,” said Hoyte. “To receive this latest order from Paul at ACOS is a huge boost to the whole team.”

The Angelina, launched in 2018, boasts the top-earning Playdium interface and is designed to provide a long-term jukebox solution for operators.

The cabinet’s algorithm learns from the music most played in a venue and adapts over time to highlight the most relevant songs, artists and search results, while the integrated PhotoBooth drives engagement and “adds a new dimension to playing the jukebox.”

“The gap in the market now is at the top,” said Hoyte in 2019, after the Angelina had begun to make its mark. “Operators are actually looking to invest, in which case there’s only one – the Angelina. Pound for pound it beats anything.”

That initial confidence is now backed up with impressive sales milestones, such as the Amusement Leisure deal signed during the recent ACOS expo.

“Jukeboxes are hugely important for us in securing and maintaining new customers,” said Amusement Leisure’s MD Paul Purcell. “We believe the Angelina is the best jukebox currently on the market.”