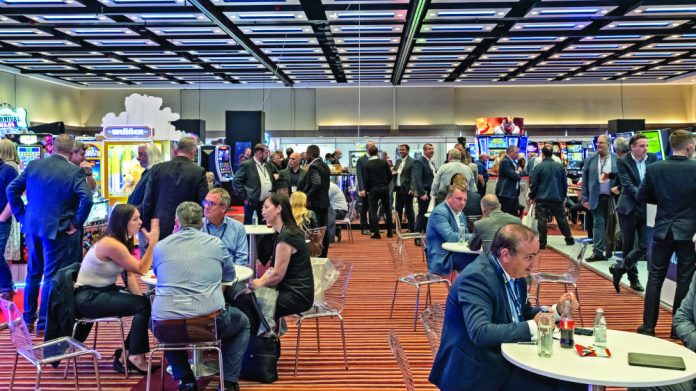 A ‘bloody brilliant’ ACOS, the spectre of Vaccine Passports and why politicians must do something about the wholesale leaking of policies – all of this and more in the latest words of wisdom courtesy of Coinslot’s favourite Off the Record Arcadian.

ACOS ticked all the boxes for me and for those people I’ve spoken to since. In many ways it was the right event, held at the right time and in the right location. The business needed an ACOS style experience and while the venue was basically an extension of an hotel across the road from the derelict site that once was home to Earls Court 2, it felt totally appropriate.

The show was well organised, everyone was in an upbeat mood, it was great fun and a breath of fresh air. Everyone I spoke with couldn’t fault the experience and it was great to have access to some exciting product.

Well-done to everyone who visited and every company that exhibited.

The minimum wage increases from £8.91 to £9.50 effective from April. While this is great news for those receiving the increase and it’s good to have more money circulating through the economy what that means for our sector is money off the bottom line. To a large extent I’m fed-up talking about it because no one really cares about the devastating impact it has on our businesses and our ability to trade. Operators are facing wage inflation, business rates, loan repayments, rising energy costs and many more demands on income. At the same time, we have the need to reinvest in equipment. Without reinvestment the proposition becomes dull and it becomes tired.

Also, we need to support the industry’s manufacturing community – the simple facts are that we cannot do all of this and remain viable. This scenario illustrates why we have to, have to, have regular stake and prize reviews that keep pace with inflation: because without one we are sunk.

F THE B PLAN

A leaked government report argues that the economy would take an £18bn hit if the PM introduces his Covid Plan B and encourages people to avoid the office. The question remains is this a price worth paying? This has been the dilemma facing the government from the outset of the pandemic. The health professionals continue to urge a strategy that involves acting early and tough but business prefers to wait to see. One of the problems is the continued reporting of Covid Infections which puts us at the top of the league table. But much of this is down to the fact that we test a far greater proportion of the population than our European neighbours.

The real measure should be admissions to hospital and the inevitable mortality rate. Counting Covid infections with figures of around 50,000 a day is going to scare an awful lot of people – which if anyone cares to read the book A State of Fear is probably exactly what the government wants to happen.

I’ve been opposed to the introduction of Vaccine Passports from the moment they were first mooted by the government. The government’s position has shifted on what seems like a monthly basis but the concept won’t go away. My objections are based on practicalities, legalities and unintended consequences.

Practically – how do you stop people from swapping or sharing phones to demonstrate a Covid Passport. Are they going to be cross referenced with other forms of ID? How are premises going to train and pay for staff? How do you identify someone who is exempt on medical grounds? How many people are you going to test? You can attend a theatre or a Premier League football match where Vaccine checks should be in operation and you will be extremely unlikely or unlucky to be asked to prove you have been double jabbed or have tested negative – so, what’s the point?

Now we are being told that Vaccine Passports could fuel the spread of Covid by encouraging people to migrate from larger venues that require documentation to poorly ventilated pubs where there isn’t such a requirement. And where does this thinking come from, I hear you ask? Well in classic government double speak meets fuzzy logic it’s from an impact assessment drawn-up by our friends at DCMS. Pointing to the experience in Scotland where there has been a 46 percent drop in business levels in night clubs post the implementation of Covid passports, DCMS say that it could cost venues huge sums estimated to be between £345m and £2.067bn.

The proposal for covid certification would see proof of vaccination or test results required at indoor settings with 500 or more attendees, outdoor settings with 4,000 or more, any venue with 10,000 or more, and nightclubs. The proposal which would be part of any so-called Plan B would decimate the night time, sport and leisure economy and simply serve to displace punters to settings with less measures and promote a rise in the number of of house parties and unlicensed events. When you list all of the downsides – it’s got Boris written all over it!

This week’s budget was the most leaked in history – there was hardly any point in the Chancellor telling us what we already knew. Personally, I agree with the Speaker Sir Lindsay Hoyle who once again ripped into the government for failing to follow protocol. It’s not just a question of bad manners and lack of respect – it’s a bit more sinister than that. I think government is sense-testing its policies to see how they sit with the population. Most policies are thought up by London-centric Oxbridge educated Civil Servants with little or no exposure to ‘normal’ society. Perhaps a better way to go about things would be to consult with the industry prebudget and in the process avoid embarrassing howlers such as the infamous Pastie Tax!