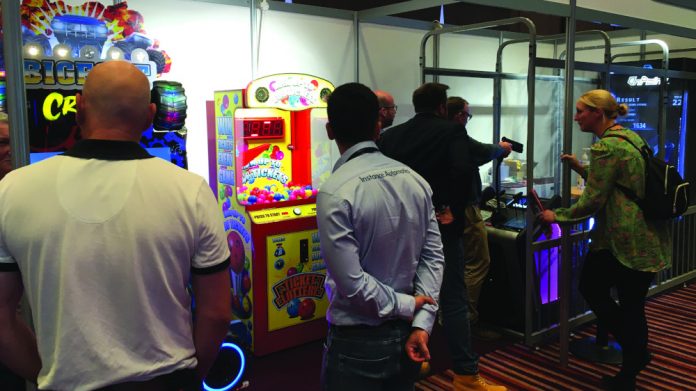 Following an “upbeat” appearance at ACOS, Instance Automatics MD Ian Eason has predicted a positive year ahead, noting that “the future is now looking much better” as the impact of the pandemic recedes.

Instance Automatics was back in full swing at ACOS this year, with the arcade and amusement specialist exhibiting a host of new titles on the back of a strong season.

Speaking to Coinslot after the show, MD Ian Eason observed that the overwhelmingly positive turnout for the first in-person UK exhibition since 2019 hints at a buoyant year to come.

“Everyone was in an upbeat mood, talk was mainly about how good 2021 had been and how we are all looking forward to 2022 to be a similar year trading wise.”

“Covid is still in everyone’s conversations and we all still know we have to be careful, but the future is now looking much better.”

Praising the exhibition as “well attended, well presented and well organised,” Eason noted “plenty of our friends and customers made the effort to attend which was nice to see.”

“I think the whole industry was glad for a couple of days out following a fantastic trading year. ACOS is normally a look into the next year and orders are normally taken at or before EAG, we were quite surprised to take some orders at this time of year.”

With the stand hosting the UNIS Elevator Invasion’s European expo debut, alongside the only “real” shooting gallery on the market UNIS On Point, it’s no surprise orders were forthcoming, with several proprietary products also gaining traction; such as new inhouse development The Cup Vendor.

“This vends the coin cups that people use when playing pushers for a small amount of money, a great way of getting your yearly cost of sale down. We also had a few other machines fitted with contactless payment options from Nayax and GPT, probably a look into the future of vending cranes and machines!”

For Instance as a company, the immediate future will also involve the launch of several new machines, as well as work on new projects, with Eason hinting “EAG will be a great event this year.”

“We are very optimistic about the future, the industry is looking to spend money going forward which is really good to see.”

“Shipping and costings are going to be a challenge but we always make it through and always bring innovation to the table, contactless payment will be a thing of the near future too – see you all in January!”