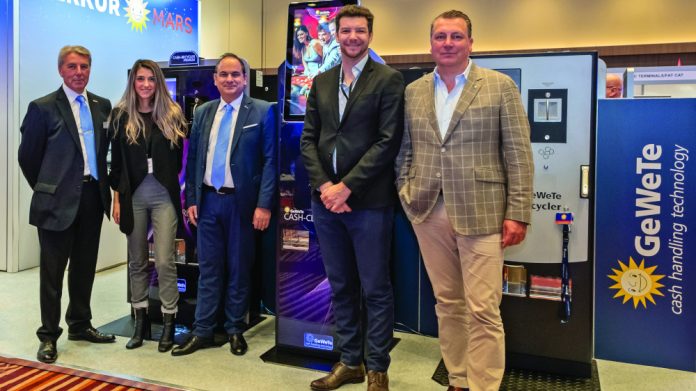 OKTO continues to build its presence in the UK cashless payments marketplace with a new deal signed with the MERKUR Slots and MERKUR bingo brands. Concluded at ACOS last week, the world leading cashless payments provider is picking up steam at an ever increasing pace in the amusements and coin-op sector shifting into pole position as it heads towards EAG and ICE.

The OKTO brand continues to build its status and reputation as UK gaming’s premier cashless payments provider having secured agreements with both the MERKUR Slots and the MERKUR Bingo brands.

The deals, which were completed and signed by Simon Dorsen, Chief Commercial Officer at OKTO and Sascha Blodau, General Manager, MERKUR UK at last week’s ACOS exhibition in London, will see the OKTO.WALLET available in 200 venues throughout the country stretching from Hereford to Harlow, Dundee to Dunstable and Cardiff to Coventry.

The first implementations, which will see OKTO integrated with the existing in-venue cashless infrastructure via the GeWeTe hub, will take place at the 2,200-seat capacity MERKUR Bingo Hall in Cricklewood North London – the biggest bingo club in Europe – and the state-of-the-art MERKUR Slots high street gaming centre in Shepherds Bush, west London.

Simon Dorsen, CCO at OKTO who is responsible for directing the roll-out of the OKTO.WALLET in the UK, said: “This is another major agreement and one that we are incredibly pleased to confirm with MERKUR, one of the most respected and recognised names in world gaming.

“We started our relationship with MERKUR UK less than six months ago in May 2021 when we signed an agreement with Regal Gaming and Leisure. Adding to the relationship in this way means that we are now active in the Pub, AGC and Bingo sectors which I believe reflects the appeal of the app with players, what it can deliver from a commercial perspective but also its’ role in delivering a safer gambling experience with tools including age verification, time-out periods, a profit and loss calculator, the ability to set spending limits and access to helplines for the small percentage of machine players who experience problems gambling. Through its 360 Program, I know how seriously MERKUR UK is about delivering a safe gambling experience and I am delighted that the OKTO.WALLET will be able to contribute to that commitment and philosophy.”

Sascha Blodau, General Manager, MERKUR UK added: “Our goal as a Group is to strive to be the very best in everything that we do. As well as the obvious criterion such as the best venues, people, and machines it also means providing our customers with the best experience and the best choice of options to play and to pay. Everything is led by our players – delivering choice will always be at the very top of the agenda and that includes a recognition that new demographics are seeking a smooth, seamless digitalised customer journey.”

OKTO, which has a pipeline of 250,000 contractually integrated gaming machines across Europe, has hit the ground running in the UK. The latest agreements with MERKUR Slots and MERKUR Bingo, join those secured with Regal Gaming and Leisure, Inspired entertainment, and Bob Rudd.