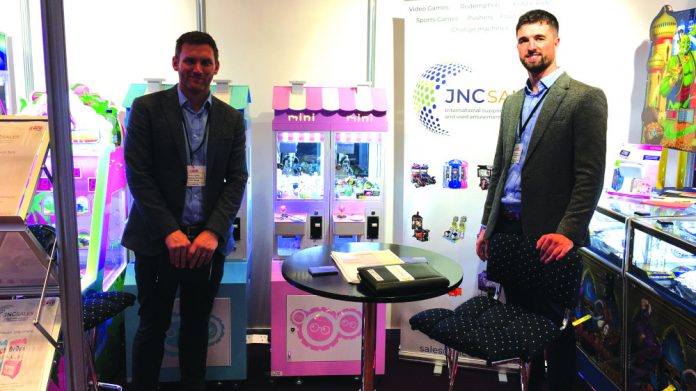 With strong cashbox data from this season to back it up, JNC offered Mini House to operators at last week’s ACOS, with many placing pre-orders for the two player crane a head of next season. This was also the case with its new space-themed prize redemption machine, Rocket Launch, which managing director Tom Clarke backed to really take-off in 2022.

Mini House and Rocket Launch took the limelight at JNC Sales’ Autumn Coin-Op Show stand, with both ending the two day event with a notepad full of pre-orders. The customer response was all the more impressive considering Rocket Launch wasn’t even on stand at the show.

But one that was, Mini House, was a show stopper for JNC. As proven by a strong performance over the summer, Mini House is a two player crane that punches way above its small footprint, and JNC’s managing director Tom Clarke backed the supplier’s latest prize redemption machine, Rocket Launch, to blast-off in the same direction in 2022. The punters agreed as they surveyed the imagery with enthusiasm.

“Having had the Mini House two player crane perform so well in our own operations this season, we were keen to take it to the show and give customers a proper glimpse of both the blue and pink cabinets. For a crane that stands at just 41cm x 61cm, to see it consistently take over £1,000 per week during the summer in one of our arcades really gives us confidence in its quality and value for money at just £2,795,” detailed Clarke. “It was also great to speak with customers about other new lines due in for 2022, with Rocket Launch three player, a space-themed prize redemption machine that vends smaller toys and sweets, really attracting attention with its vibrant cabinet design and alluring gameplay.”

Clarke was impressed with the attendance of last week’s event, but he was even more pleased to gauge a positive mood on the show floor – and one that was receptive to JNC’s exciting new launches.

“There was certainly a feel-good atmosphere across the show, with it being the first chance for many to have a long overdue catch up, buoyed by a strong summer and optimism for next year,” he continued. “As is tradition with ACOS, it was also the perfect platform to preview some of our new lines, and it was great to scratch the pad with pre-orders for the likes of Mini House and Rocket Launch. Like many other distributors, we have certainly been encouraging customers to put their names against new lines for next year due to the current strains on international shipping, where it’s certainly better to be at the front of the queue for 2022’s new equipment.”

Indeed, many operators made sure to get their orders in on the first day of the event, celebrating in the evening with a pint and a much needed catch-up after so long without opportunities for face-to-face conversations.

“You only had to look at how busy the bar was on the Wednesday night to see how much we’d all missed this type of show!” Clarke commented. “Already people are looking ahead to 2022, certainly with the EAG due to be held slightly earlier next year, and its exciting to start having those conversations with customers again regarding machine options. The main focus for us was gauging feedback for our new lines, which we can take into next year, and having pre-orders certainly gives us more confidence that the last 18 months of sourcing and developing these new products have been worthwhile!”

With a busy few months ahead, JNC Sales will likely be collecting even more pre-orders at the Family Attraction Expo at the NEC in November, before returning to London in January for the industry’s largest event, EAG.