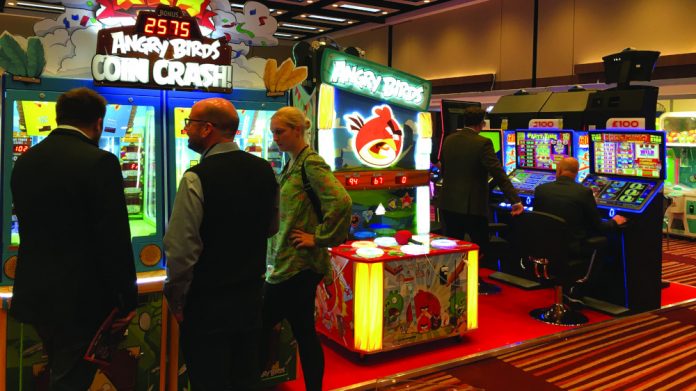 Speaking to Coinslot, Harry Levy sales’ Geoff Spencer praised a “better than expected” appearance at ACOS this year, sharing his thoughts on the next few months for the industry and his sage advice for those concerned about supply-chain difficulties.

Harry Levy’s products certainly made an impact at ACOS 2021, with its “stand-out” range of new machines platformed on one of the largest stands in the Ibis Exhibition Centre, adjacent to the main entrance.

Speaking to Coinslot, sales’ Geoff Spencer noted that it wasn’t just the location that drew the visitors; the company’s offering of well-tested, UK-made products delivering a highly-rated, reliable investment was a strong incentive.

“Turnout was good, better than we expected,” Spencer said. “Everyone was looking to have a good chinwag and get in contact with people they hadn’t seen for a long time, so numbers at the show were strong.”

As was the Harry Levy portfolio on display. Alongside the new four-player water game Dinosaur Era, which attracted marked attention during its first UK appearance, was LAI’s Coin Crash Angry Birds, another alluring piece on the stand.

Conversation, as expected, was the order of the day, it was after all the industry’s first domestic gathering since February 2019. And Spencer acknowledged that “the supply chain was a big topic – and from a manufacturing point of view that is challenging.”

“We are finding that the lead times from suppliers have increased, so we were trying to emphasise that with the customers, and that they really need to look at trying to commit to product possibly this year a little bit earlier than they normally would, ideally before the January show.”

“With what’s gone on for the last 18 months I think, from our point of view, you have to be slightly wary. So it was a case of trying to push across; if you really need product, and if you want it delivered for the season you’ve got to press some buttons now.”

That said, Harry Levy continues to test new product in the lead up to January, alongside proven in-house titles, with Spencer giving operators a piece of advice he believes may ease their supply-chain woes – “buy British.”

“Harry manufactures product that’s made in the UK, and we’re still churning them out, and that’s not affected by the massive shipping costs that you’re getting from bringing in from everywhere else.”

“In theory, UK-manufactured product remains unchanged in pricing and lead times, and it’s good to try and support UK manufacturers.”