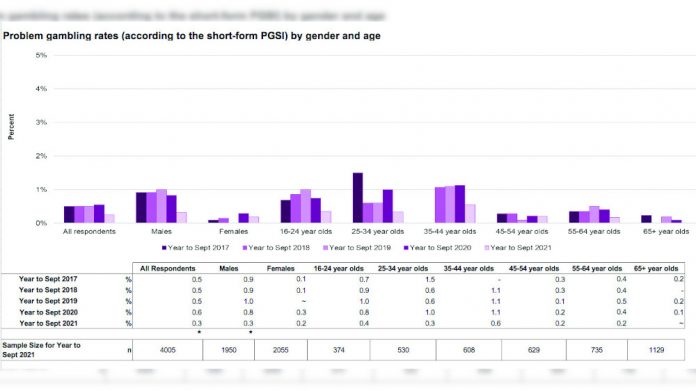 The Gambling Commission’s latest survey of problem gambling for the quarter ending September 2021 has revealed that the rate has halved in the past year from 0.6 per cent to 0.3 percent. It’s now at its lowest ever level.

Problem gambling rates are at their lowest level since official records were introduced. Now standing at 0.3 percent, it’s not just the all-time low rate of problem gambling in the UK that stands out; the sharp decline over the past 12 months – 50 percent down from 0.6 points in 2020 – represents a trend of consistently falling levels of problem gambling across all age groups and gender.

And the pattern of decline is not confined to problem gamblers; those at moderate risk have declined significantly over the past year – or five years to be accurate – showing a 40 percent fall to 0.7 percent on 2020. Low risk gamblers, too – those who are far less likely to fall into problem gambling – have also declined from 2.2 per cent to 1.9 – half the level of the numbers in 2017.

It is very good news from the Gambling Commission’s latest quarterly telephone survey of 4,005 people; but shush, one mustn’t let the new gambling minister hear. It might have a positive impact on the gambling review.

And that seems to be the overriding conclusion to draw from these latest statistics. They’re not profiled, publicised or promoted; in fact, you need a detective to find them – which is probably why the all-party parliamentary group on betting and gaming are currently baying for the Commission’s blood.

It’s unearthed a wave of distrust and resentment at the regulator. The low key, under the radar profile of these declining rates of problem gambling – undertaken every quarter – seems to reinforce that picture.

As does the GC’s response to the data; the release issued from the regulator the same day was not about the good news of record breaking levels of declining problem gambling, but the ‘worrying’ lack of knowledge about problem gambling and crime. Good news facts are clearly not good news stories for the GC in gambling review times.

So, what is it that makes these statistics so unpalatable to problem gambling stakeholders, and seemingly the Gambling Commission itself? For young gamblers aged 16-24, problem gambling levels halved to 0.4 percent, and for the more prevalent group of at-risk gamblers, 25-34, the rate didn’t just fall, it imploded to 0.3 percent, more than three times less than a year ago.

In fact, every age group declined significantly in this latest survey, with the exception of a stubborn flatline for 45-54 year olds who stayed static at 0.2pc.

On the gender breakdown there was a decline for both men and women, although the fall for men was staggering: down to 0.3pc from 0.8. The number is a third of the rate in 2017. And the decline was replicated for moderate risk gamblers with men showing significantly less sign of laddish patterns – down from 1.6pc to 0.9pc, again one third of the levels of five years ago.

A lot of figures to take in, but only one glaring trend: problem gambling rates are down to their lowest ever level.