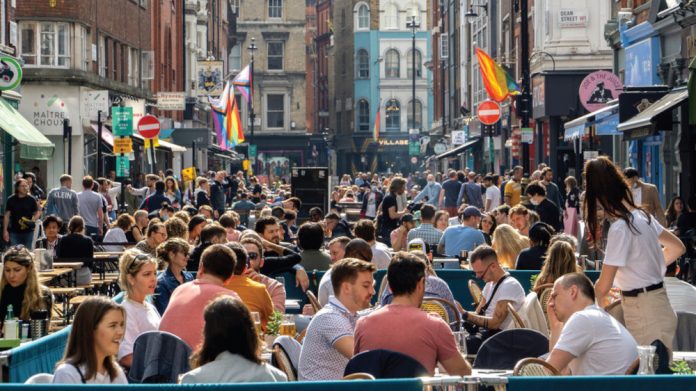 As the UK economy starts to wake up from its covid-related slumber, tourism and hospitality are leading the way, according to Lloyds Bank, who also warned of the manufacturing industry’s poor output due to continue supply chain issues.

The UK’s hospitality and tourism sector outperformed the rest of the economy for the first time in more than nine years during September, new data revealed.

The Lloyds Bank UK Recovery Tracker showed that the sector had a reading of 62.2 last month, with readings above 50 signalling output is rising, while below 50 indicates contraction.

For the first time since January 2012, the sector was the fastest growing of the 14 monitored by the tracker, benefiting from high demand and an easing of lockdown restrictions. Demand for large-scale events, such as concerts, fairs and music festivals, and the easing and simplification of international travel rules in England has given tourism a significant boost. This has led to the sectors rebounding sharply month-on-month, from 42.9 in August to 55.9 in September.

“We are now firmly in an economic phase of recovery where big leaps in activity won’t happen every month,” said Jeavon Lolay, head of economics and market insight, Lloyds Bank Commercial Banking. “As the UK economy continues to inch towards its pre-pandemic peak, logistical challenges, higher energy prices and uncertainty relating to the path of the virus as we head into winter are key risks,”

Unlike hospitality and tourism, the manufacturing sector has not yet returned to pre-pandemic levels. The output of automotive manufacturers and metals and mining and household goods producers contracted sharply during September due to materials and staff shortages. Meanwhile, the rate of input cost inflation last month was the second highest in the tracker’s history, as energy prices spiked and demand for labour intensified. This has led all 14 sectors to raise their prices, with price increases being felt in all industries – amusements being no exception.