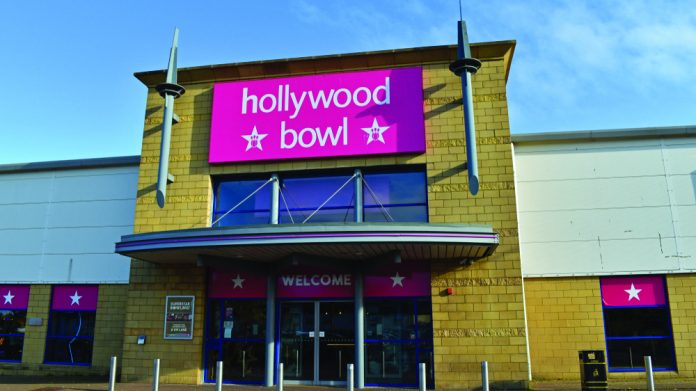 Hollywood Bowl has reported sales between 17 May and 30 September 2021 increased 29 percent on 2019, with full year revenue topping £74m. For a sector so badly hurt by Covid restrictions, the stars are shining brighter for Hollywood Bowl.

Hollywood Bowl has reported sales between 17 May and 30 September this year were 29 percent higher than for the same period in 2019, with full-year revenue hitting £74.6m.

The figure is £20m higher than had been predicted by analysts, and comes as the bowling group looks to seize the opportunity for expansion created by widespread retail vacancies.

“It has been fantastic to welcome our customers back in record numbers, and to see families and friends enjoying their time in our bowling and mini-golf centres once again,” said CEO Stephen Burns.

“There was a lot more people around. Some people had been paying down debts during lockdown, and were spending their summer holiday budgets in the UK.”

Not only did the group’s venues generate cash every month since reopening on 17 May, but summer visitation delivered record results, with August alone delivering £20.1m in sales – a 50 percent increase on August 2019.

The company added that it expects full-year underlying profit margins to remain consistent with the prior 12 months, with all trade going forward returning to pre-pandemic levels.

Though AJ Bell analyst Russ Mould reacted to the “impressive job” done by Hollywood Bowl in managing its cost base, he did sound a warning that ongoing hospitality staff shortages could negatively impact both revenue and profit in the coming months.

However, Burns told the Financial Times that the company “did not have as many foreign workers as some other businesses” so was not in line to be as heavily affected as other hospitality and leisure operators.

Hollywood Bowl boasts a nationwide estate of 61 alleys and three Puttstars mini golf venues, employing 2,000 staff, and has stated it remains confident in meeting the target of opening 14 to 18 new centres by 2024.

The expansion drive comes on the back of a full scale renovation programme, which saw the group’s sites refurbished and redecorated, with expanded arcades and new scoring technology.

The company also seeks to take advantage of a trend toward shopping centre landlords seeking experiential leisure as a replacement for major retailers as anchor tenants.