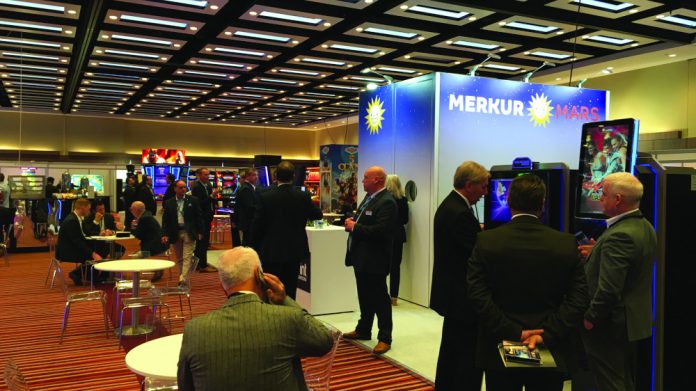 If there was ever any doubt as to the importance of in-person trade shows in a world of virtual interaction, the first day of ACOS 2021 put paid to the detractors.

There was a spirit of celebration all round at the ILEC Conference Centre, with a hum of happy recognition and reconnection in the air – as well as the unmistakable sound of commerce back in full swing.

“I’ve been gobsmacked,” said Alex Kirby of NSM Music. “Obviously I speak to customers on a regular basis and most said they’d be waiting till the January shows, but it’s been a great morning so far, and we’re already taking orders.”

Though the peace of the morning was mostly devoted to catching up, by midday an eclectic and enthusiastic crowd of visitors and operators was already thick around the majority of the stands.

Whether the general feeling of positivity was down to exhibitors simply being thankful they were able to overcome supply issues and bring machines to the floor, or a wider sense of delight in being back networking it was hard to say.

However, it was undeniably a well-needed reawakening of the world of exhibitions, and a much-missed opportunity for customers and suppliers to interact.

“It’s amazing to be back in-person,” said OKTO’s Diana Theodoridis, a sentiment echoed by Sam Coleman of JNC Sales, who spoke of the “fantastic” response from visitors.

Though the first question on most people’s lips when meeting once again was unsurprisingly “how was your pandemic?” the overall message of ACOS was that despite the past 18 months; there’s undeniably a positive future ahead for the amusements industry.

And that was clearly evident in the encouraging reports of trading during the day, and the abundant quality of new product on display. Whilst it was not the biggest ACOS in terms of exhibitors, it was one of the biggest opening days for visitors.

The show has never been a number-cruncher, ACOS has always prided itself on the intimacy of the event. However, it was a well attended return to action for the industry as well as an enthusiastic one.

For debutants NRM, it was definitely a good year to join the show. “It’s the best ACOS I’ve ever been to,” said NRM sales manager Freddie Shreeve. “It’s been really good, really busy.”

And sales director Mark Titterton at Whitehouse Leisure was equally enthused. “Of course we expected it to be popular, but it’s really busy.”

Day one down, one day to go. And on the evidence of Wednesday, it’s already job done for ACOS 2021.