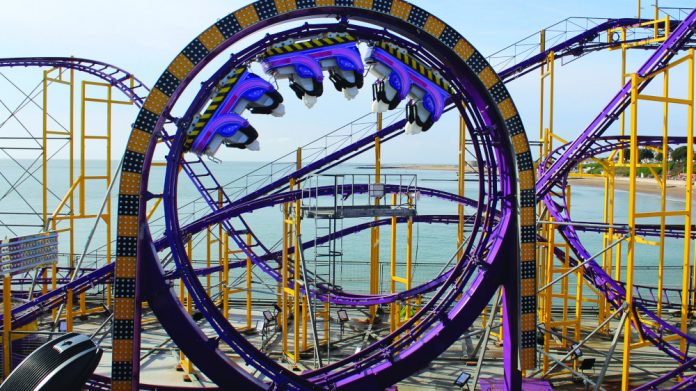 Clacton Pier has completed its first test of the much-anticipated Looping Star roller coaster, with the ride set to open during the attraction’s upcoming Halloween Festival.

Clacton Pier has completed the first phase of testing for its new Looping Star roller coaster, which will officially open during the attraction’s half term Halloween Festival.

Visitors will be able to enjoy the Zyklon ZL42 – one of the last built by Italian company Pinfari – from 23 October, with many already eager to try the long-anticipated ride.

“We have run several days of testing and customers saw the Looping Star operating at the weekend,” said pier director Billy Ball. “People were keen to enjoy the ride, but we had to explain it will be a few more days before it can open to the public and it will also need official certification by independent inspectors before families can enjoy this thrill attraction.”

The Looping Star was intended to replace the outgoing Stella’s Revenge, sold to an attraction in South America in 2019, however, installation of the structure was postponed in February due to the collapse of the pier’s specially-extended ride deck.

The impact of Covid then halted all significant progress on constructing the ten-metre tall attraction, but the ride was set to open this summer – until delivery failures forced a further setback.

“There have been some frustrations in the delays of getting the Looping Star up and running – mainly due to additional workload as a result of storm damage sustained on Valentine’s Day 2020 – but hopefully the wait will be worthwhile.”

“We have received many enquiries about when the ride will be in operation, and we are just about there now.”

The pier’s Halloween Festival will run during half term from 23 to 31 October, with a free fireworks extravaganza on 6 November.