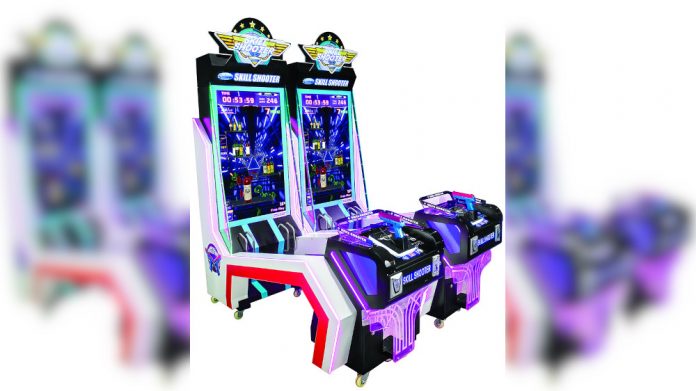 With Skill Cut Winner, Drop a Winner Deluxe, GoGo Chicken and Stern Pinball’s ‘The Mandalorian’ and ‘Godzilla’ all scheduled to make an appearance at this year’s ACOS, London-based Electrocoin is set to host a hugely diverse stand on its home turf, with a full range of Cat C machines and “one stop shop” for ticket management also making the short journey to the ILEC Conference Centre.

Skill Shooter and Stern Pinball’s Godzilla will both have their UK debuts at Electrocoin’s Autumn Coin Op Show stand this week. Beside them will be a host of redemption, skill and prize payout machines , backed up by Electrocoin’s full range of Cat C machines and their “one stop shop” for ticket management – including cashless solution Intercard. Proven performers such as Skill Cut Winner will again be on display but in the latest new colours – Black and Violet.

“Skill Cut Winners’ popularity with players and operators goes from strength to strength and is now available in 10 different colours,” said sales and marketing manager John A. Stergides, who was also excited to talk about the Skill Shooter – an adrenaline packed shooting game that can be linked for up to 4 players for competitive play.

“The feedback we have had so far has been fantastic and we are very excited to be presenting this at ACOS 2021,” he added.

Stern Pinball will as usual have a significant presence at Electrocoin’s ACOS stand, with the blockbuster license of The Mandalorian being on display alongside Godzilla on its UK launch.

“Godzilla will display Sterns latest QR Insider Feature which will be available on all their pinballs going forward,” explained Stergides. “Their pinballs are evolving to keep up with modern technologies as its now brought to the online world – it has been in the pipeline for many years and Godzilla will be the launch pad.”

Electrocoin has also established itself as the “one stop shop” for ticket management, continued Stergides, with the Galileo Tickets Eaters and Elmac WINMT SQL system for single and multiple sites. Attendees to ACOS will also see the latest SQL software on display, with the split screen operating system, thus allowing operators to serve two customers simultaneously.

Stergides also noted that Electrocoin provide a cashless solution for FECs in shape of the Intercard system.

“FECs can either go completely cashless with e-tickets or combine it with coin-play and redemption tickets,” he detailed. “Both of these systems will be demonstrated at ACOS, giving the operator an insight to effective stock control and income management.”

Alongside the FEC products, there will be a full range of Cat C, both analogue and digital, including Monte Carlo, Bar-X Tablet System along with, Bar-X 7even Cat D Infill and the latest Spin Gaming digital compendium. In addition, Electrocoin will show the classic reel-based Bar-X 7even Refurbished model with its £25 Jackpot.