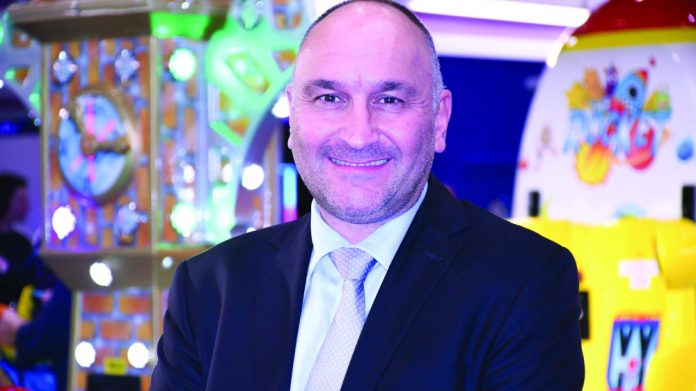 SB Machines’ Paolo Sidoli is launching Wave Patrol at ACOS next week in full confidence that the quality of his latest Italian-made children’s ride will demand the £2 per play it charges.

The older generation of machines may only charge £1, but they are generally smaller, with simpler movements and dated designs – and Sidoli sees their days as numbered.

“£2 per play will become commonplace on larger rides with complex movement, such as Wave Patrol,” he explained. “The traction of £2 play will get stronger as older rides get phased out. In fact, obsolescence on established mature equipment is taking place much quicker than anticipated.”

While children will choose the bigger, newer ride almost every time, for the parents that pay for their children to play these rides, the price increase has to also be justified by a clear increase in the quality of the experience, and the memories it will create. That’s where the real technology and innovation shows in SB Machines rides, with every possible aspect of the experience maximised by the company’s Italian manufacturing partner.

“The technology behind the experience is vast: Led lighting, 3 phase motors and inverters that vary the movement of the ride, raspberry Pi modules, advances in motor gearing, better engineering on control boards, enhanced and varied sound effects. This all results in some ground breaking rides that should maintain their performance throughout the 2020s,” detailed Sidoli. “The application of new types of paints and lacquers have also made rides even more attractive. For example, combining skillful airbrushing with vinyl wrapping on a ride such as Wave Patrol sets new standards in the market.”

He added that site testing during 2021 has exceeded the company’s expectations, with the machine “encompassing the key philosophies for a great ride: great movement, eye catching design and visually imposing.” While Wave Patrol is hogging the headlines ahead of SB Machines’ ACOS exhibit, it will be shown alongside an already proven ride, Kangaroo Up and Down carousel, which has been extremely popular in previous years.

Coinslot: There has been a surge in traditional amusements during the staycation boom. How have children’s rides fared during this time?

CS: SB Machines has been a market leader in rides for decades, and you are continuing to invest in quality products. Why and how have children’s rides remained relevant in todays market?

PS: Italian rides especially, have managed to keep up with all the technological changes, design changes and evolving customer habits of each individual market. Rides target a 3 to 8-year old age group and each year the customer is always renewing. Children get to experience rides which they have never seen before and if the ride has that magic movement, they will keep going back to it. Cognitive ability and development at the younger age group means that children do not focus as much time and attention to other distractions such as digital devices.

Rides must always remain appealing. By building them better and pushing the boundaries with new movements, they will comfortably compete with other coin-operated amusement equipment

CS: How has your supply chain held up and are there any further disruptions on the horizon?

PS: We have not experienced significant disruption in the transportation of our goods to the UK. The process is taking slightly longer and it is costing more. However, lead times will not increase to the end user. We have carefully looked after our supply chains for over 25 years and this loyalty to our transportation companies and manufacturers is paying off.

However, as Covid dissipates, the impact of Brexit will become predominant – we will have to get used to even higher costs as physical Custom Border Checks come into force from January 2022. Also European transport winds down from the first week in December until middle January. We have already planned for this disruptive scenario.