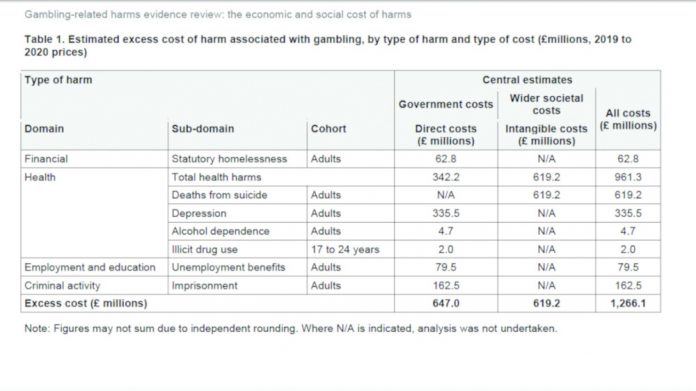 It doesn’t take a clairvoyant to predict what kind of figure the health authorities would come up with when they calculated the cost of gambling harm to both the government and society. But even the £1.27 billion – nudging towards one percent of its entire annual budget – watered the eyes. However, Public Health England has broken down the costs both tangible and otherwise – but do they outweigh the benefits and more importantly, do they stack up?

A report from Public Health England has estimated the cost of gambling harm to English society to be £1.27bn.

The Department of Health agency said that its 95 percent confidence intervals for the cost were £841m on the lower end and £2.12bn on the upper end, adding that the final figure of £1.27bn may be an underestimate because of a lack of available evidence or difficulty pricing certain factors.

Hmmmm. We have a budget in three weeks time and a distressed and underfunded NHS. These are particularly well-timed figures, not leat with a gambling review also in the final countdown.

Bacta responded both politely and pointedly. CEO John White acknowledged that while some may question the accuracy of PHE’s figures, they will no doubt play a part in the upcoming gambling review.

“The Public Health England report into the cost of gambling related harms provides some helpful figures on the cost of this public health issue,” said White. “Whilst there will be criticism of the accuracy of the numbers, the Report starts to drill down into where the costs to the country, to individuals and to their families arise and helps us to identify where to target help. It is encouraging to see that the rates of problem gambling and at risk gamblers continues to fall, which must be due to the ongoing efforts of regulators, campaigners and industry to make gambling safer. It will play an important part in the gambling review as Government attempts to strike the right balance between the majority of gamblers who enjoy the pastime, and the vulnerable that get into difficulty as well as the economic cost of problem gambling and the economic benefit arising from an industry that contributes billions to the economy and employs hundreds of thousands of people and enjoyment to many more.”

Breaking down the figures, PHE added that just over half of the estimated cost – approximately £650m – was a direct cost to the UK government. Of this, £342.2m was due to mental and physical health costs, while £162.5m was due to criminal activity based on the fact that 3,799 people are currently in prison for gambling- related offences. The cost of employment and education harms was priced at £79.5m, while the cost of financial harms related to gambling came to £62.8m – most of which related to homelessness. The report didn’t note, however, that betting and gaming tax receipts paid the government approximately £3bn last year, more than 4 times the cost to government estimated by PHE.

The remaining £619.2m in costs calculated by the agency were “intangible” costs to society, which present more of a challenge to price. One of the intangible benefits of gambling, in this case, would be society’s freedom to choose where it spends the money it earns, and for many, that freedom is priceless.