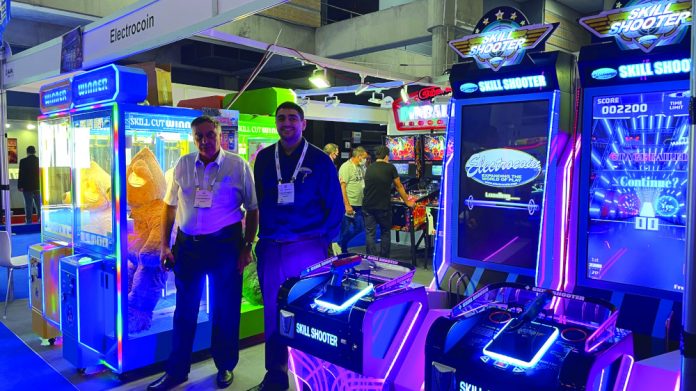 Following the successful return of in-person trade shows in the form of IAAPA Europe last month, Coinslot caught up with Electrocoin’s head of sales and marketing John A. Stergides to discuss what made a splash for the supplier at the Barcelona show.

With reports that more than 8,500 delegates made their way to Barcelona last month to attend the IAAPA Europe Expo, it’s clear that demand for in person trade events hasn’t waned despite an 18 month hiatus.

As the dust from the September event settles, Coinslot spoke to John A. Stergides, head of sales and marketing at machine manufacturer and supplier Electrocoin, about the current position of the European market and what positives lie ahead.

“It was a very positive show and we are glad we were able to participate in our first exhibition in over 18 months,” said Stergides. “We had the opportunity to catch up with existing operators and distributors after such a long period but also meet new ones which was a great sign for our industry.”

“It seems everyone who attended had a positive outlook on the year ahead despite the past 18 months.”

Electrocoin’s latest product Skill Shooter was the star of the show, with Stergides noting the cabinet was “very popular and constantly being played.” Elsewhere Stern’s latest Godzilla Pinball proved a draw, especially for its new Insider Connected QR feature.

The perennial favourite Skill Cut Winner was also on display in four colours, attracting visitors from across the exhibition to Electrocoin’s stand.

“We didn’t know what to expect although we were hoping for a great show being the first in our industry, as we were launching a couple new products in particular the Skill Shooter and had our biggest stand to date in the IAAPA Europe show.”

“It turned out to be a very positive show with our products and new launches proving very popular.”