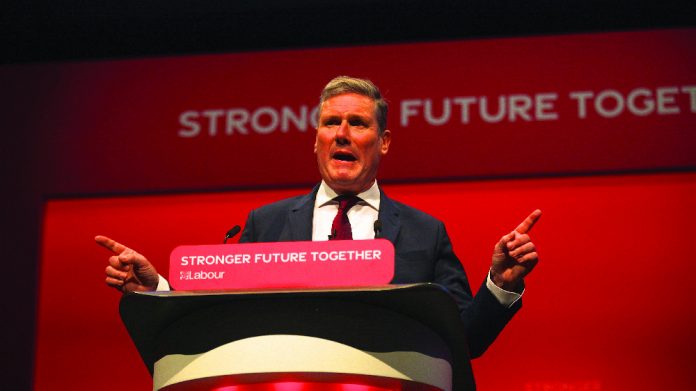 This week’s OTR reflects on an out of touch Labour Party Conference, asks who is to blame for the fuel crisis and urges politicians to differentiate between online and land-based gaming.

Keir Starmer delivered his first in-person conference speech in Brighton. It was widely accepted as being a pivotal moment for his leadership and for the party – unfortunately for him he blew it! Since he was elected leader of her Majesty’s official opposition, I have wanted SKS to do well and be a success. Not because I’m a paid-up member of the party but because the country needs a credible opposition to hold the government’s feet to the fire. This was the first time the Labour leader had been able to address members in the flesh – meaning that he’s had 18- months to practice what he was going to say and polish up on his delivery. He isn’t a natural speaker or orator and people don’t warm to him but where were the takeaways that people will remember or the big ideas? I also get a bit tired when politicians go on and on about their parents and their upbringing – who actually cares? Sorry Sir Keir but I didn’t get excited about what you had to say, I cannot see you moving in to Number 10 and if it wasn’t for the rule changes that got pushed through at Conference, I don’t think you would be leader of the Labour Party for much longer. The honeymoon is well and truly over.

Don’t PANIC but who’s to blame for the fuel crisis – Brexit, the media or just old fashioned greed?

When presented with a national crisis our knee-jerk reaction is to find someone to blame, someone to pin the whole mess on. With reference to the fuel crisis, endless forecourt queues, stories of key workers not being to get to their place of work, missed hospital appointments, punch-ups and soldiers being asked to fill-in for the missing drivers – a host of likely culprits was drawn-up. First of all, it was the trade bodies representing the road haulage sector who were lambasted in the national press for leaking ‘confidential’ discussions that took place with government ministers. Then the (large) and vocal sections of public opinion who have never forgiven the British population for voting to leave the EU pinned it all on Brexit. After which the Government took the flack for failing to prepare for the repercussions of Brexit, not granting emergency visas, being too slow in calling-up the army, for ignoring the systemic problems that the road haulage lobby had been talking about for years and for telling the public that there was no need to PANIC! Then the media was criticised for reporting on the government’s insistence that there was no need to PANIC! and finally there was the public who did indeed PANIC! I have a friend who owns a petrol station and he was cleared out of a week’s supply in less than a day. Apparently with so called just in time stocking policies it only takes an 8 percent increase in consumption to leave shelves empty. My take on this is that in a sea of potential blame my stand out folk devils would be the media for sensationalising the situation and the public for falling for it.

When the Labour Party Conference voted to raise the minimum wage to £15/hour it struck home how little the party knows about small to medium sized businesses.

And to be fair, it’s not just the Labour Party. Boris Johnson has doubled down on his public pronouncement that the way to solve the labour shortage is for firms to simply pay their staff more – if only that was possible! I think both parties treat every business as if it’s an Amazon or a McDonalds employing vast numbers and making huge profits.

There’s a fundamental ignorance surrounding businesses the size of mine. Neither the Prime Minister or the leader of the Labour Party has ever run a small enterprise and neither has any experience of working in the retail or the hospitality sector – if they had they would not be talking so glibly about how to run a business.

As I understand it the vote taken at Conference is not binding but the fact remains that there’s a whole lot of smaller business owners who don’t earn £15/hour and who would be forced to close their businesses if that was pushed through.

Where’s the sense in that and why do the Labour Party allow themselves to look so out of touch?

There’s been a host of leaks suggesting that the White Paper on gambling will recommend a ban on allowing gambling logos on football shirts.

In fact, so many leaks and so many unnamed DCMS sources that you have to assume it’s true. On a personal level, I have to say that I think such a move is overdue.

Chris Philp, who replaced John Whittingdale as gambling minister is said to be in favour of such a reform and it would be the type of headline grabbing policy that would show the government was serious about gambling.

Nine of the 20 Premier League clubs are sponsored by betting companies and many of those betting brands aren’t available in the UK suggesting that the motivation is to develop a global awareness courtesy of the Premier League’s international popularity.

But the association between online betting and Premier League football is now entrenched to such an extent that friends of mine say their kids think that the adverts in the Sky coverage are when you bet.

Once again there’s a danger that the excesses in some aspects of the online gambling world will inevitably infect the reputation of our own form of low stake landbased gaming.

How many organisations differentiate between online and land-based – virtually none.

The pronouncements coming out of the APPG on gambling harm simply refer to gambling.

We have to be aware that some opponents of gambling will seek to use any restrictions as a way of justifying further limitations across the board.

It could be a lose/lose scenario unless we make that differentiation explicit and understood by MPs and policy makers alike.