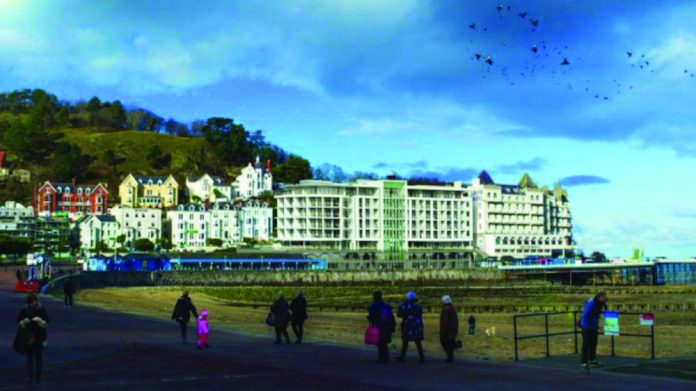 The future of Llandudno Pier could be “at risk” if a new £20m seafront apartment complex is built, according to owner Adam Williams, who warns “there is no reversing a residential development after it’s been built.”

The owner of Llandudno Pier has stated the controversial £20m residential development on the town’s seafront could force the Grade II-listed landmark to “close its gates for good.”

“I fail to see how a ‘modern’ luxury block of 54 flats, many will be second homes, can have a positive effect on a town that cherishes its Victorian history,” Williams told North Wales Live.

“Everyone needs to realise what is at risk and if everyone is happy with what might be lost then so be it. But it is my responsibility to do what’s best for the pier’s future and that is what I am trying to do.”

The proposals would see three-storeys of parking, 20,000 sq ft of restaurant space and a further six levels of apartments built on land between the Grand Hotel and Leisure Island Amusements, which has remained empty since the Pavilion was destroyed by fire in 1994.

Though initial plans submitted by Quay Developments Ltd owner Alan Waldron were approved by Conwy Council in 2018, the scheme has long proved divisive, with many residents and business owners calling on the Welsh government in June to issue a holding request to the local authority.

“This has gone on so long now, the public seems to think it has just gone away, but it hasn’t,” said Williams, adding the building could impact “several independent businesses and the amusements at the heart of it all.”

“The pier seems to have survived for over 100 years with just tourism – even with its substantial maintenance bills and limited space. If Llandudno and Conwy would like the pier to survive for the next 100 years we have to do something now. There is no reversing a residential development after it’s been built.”

Over 700 local residents have now signed a petition addressed to Welsh Government minister Julie James opposing the apartment complex, instead proposing the return of the Pier Pavilion.