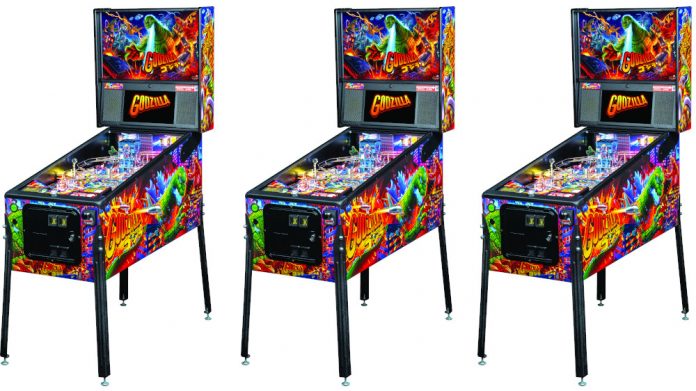 Stern Pinball has partnered with Toho International, the subsidiary of the Japanese entertainment studio Toho Co, to launch a line of pinball machines that will include the iconic Godzilla franchise. And this title will be exhibited by Electrocoin at IAAPA Europe next week.

Electrocoin has confirmed that Stern Pinball will launch a line of pinball machines based on the iconic Toho film franchise featuring the King of the Monsters, Godzilla. The products will be debuted on Electrocoin’s stand at IAAPA Europe in Barcelona next week, where attendees will have the chance to play a pinball version of Toho’s longest running film franchise, Godzilla.

In this monster-packed pinball adventure, players become Godzilla to battle evil aliens, the Xiliens, who use mind control rays to take control of the monsters King Ghidorah, Gigan, Megalon, Ebirah, and Titanosaurus. The Xiliens are demanding all of Earth’s resources, but Godzilla and his allies, Mothra, Rodan, and Anguirus, must battle the Xilien invasion with the goal of conquering Mechagodzilla to become King of the Monsters!

Godzilla pinball machines also debut Stern’s Insider Connected system, which includes a QR code reader on the bottom arch that enables players to interact with the game and this new network in a variety of ways. Stern Insider Connected provides new entertainment and player engagement features and an operator focused tool set to drive location play and remotely manage every aspect of the machines. Insider Connected goes live with the launch of Godzilla, with the full scope of features scheduled for roll out over the next year.

“Partnering with Toho, Stern have brought the Godzilla universe to pinball,” commented Electrocoin’s John Stergides. “Insider Connected enables players, owners, and operators to interact with their machines like never before. It’s a very exciting title that will be a fantastic addition to operator’s pinball area and will be debuted on our stand 2-1528 in IAAPA Europe in Barcelona between 28-30 September”