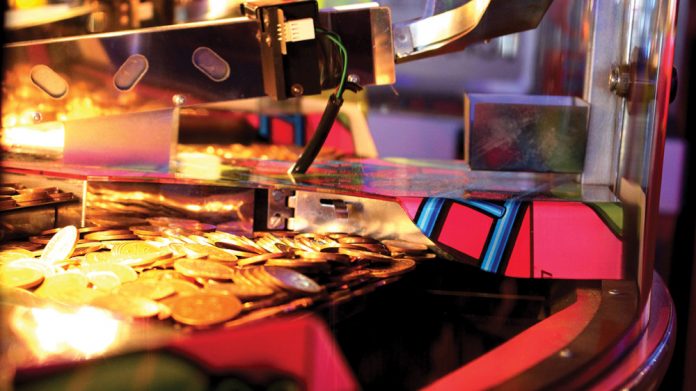 Poppleston Allen solicitor and gambling industry expert Imogen Moss tackles the big debate on cash in the modern society. Whilst coins and notes are fighting to retain their place on the currency ladder, she suggests the future for arcades is brighter than many may think.

The UK experienced an enforced ‘staycation’ or domestic tourism boom this summer, with many traditional seaside resorts, holiday parks and other classic British holiday destinations seeing a revival in fortune and an uptick in bookings as holidaymakers with few international options spent their summer break closer to home.

Perhaps one of the most iconic attractions at the great British seaside resort is the pier, complete with arcades in which the ‘penny slots’ are a staple and for many likely their introduction to or only experience of gambling, particularly land-based.

But in a society where cash is quickly becoming obsolete and many are paying extra scrutiny to the role gambling plays, what does the future hold for the seaside arcades, particularly if the trend for more domestic tourism outlasts the pandemic?

Like millions of British people, I have fond childhood memories of idyllic summer holidays spent in seaside resorts like Looe in Cornwall, when trips to the arcade were just as much an integral part of the fun as fish and chips, an ice cream or getting out my bucket and spade.

I cherish those memories and enjoyed taking my daughter to the same arcades on our holidays.

Gambling Commission data shows that between April 2019 and March 2020 (the last reporting period pre-pandemic) arcades in Great Britain generated revenue of £425.61 million. This huge contribution to the economy could be under threat however, if a report cited by the BBC in 2019 that cash could be eliminated from society as soon as 2026, is proved correct.

I take an alternative and far more positive view. The more we move to a cashless society, the greater the nostalgic appeal of the seaside arcade. If cash becomes more of a novelty in daily life, particularly for the younger generation, this will only enhance the appeal of a traditional pursuit, particularly to older generations. These groups will no doubt be keen to relive their youth, sharing in the simple pleasures of a decidedly analogue pastime like playing a cash based penny fall machine with younger descendants who live in an increasingly digital world.

Not only is that good news for families like mine, but more significantly, the economy, the exchequer and the 19,235 people employed by the venues.

The Gambling Act 2005 specifically prohibits the use of debit and credit cards from being used to play gaming machines and there would be a few hurdles to overcome for that legislation to change.

The Gambling Commission has been clear that it considers some contactless payment systems, such as Apple Pay and Android Pay as akin to the use of debit and credit cards as they are effectively a medium by which the direct payment is made from a customers account. However, the legislation does permit innovation in the cashless arena and operators have developed payment technologies incorporating app based digital wallets.

Many arcade operators already accept indirect payment methods to facilitate play, which include the use of ticket-in ticket out (TITO) payment systems.

Importantly, the gambling framework in Great Britain is designed to ensure that players can control their spend and gambling activity, which includes the application of limits to the amount that may be deposited onto a machine in a single action and requiring licensees to ensure that sufficient measures are applied to monitor customer spend, behaviour and provide customer with checkpoints and control mechanisms to control their rate of play and spend.

Part of the joy of playing on the traditional seaside arcade machines comes from placing two pence pieces into the slots themselves, as well as the sensation that comes with the payout.

When the Gambling Commission investigated alternative payments in land-based gambling environments, it found the majority of land based gamblers had a preference to play with cash as they believed it helped them to set limits and monitor their spend. The report stipulated that in spite of the societal shift to cashless payments, land-based venues should continue to function with cash payments.

The industry will no doubt be looking closely at the pending Gambling Act review by the Department for Digital, Culture, Media and Sport (DCMS) when published to understand if it’s likely to bring about any changes that would usher in a new era of cashless arcade gambling. If this was introduced, there would no doubt be some very specific technological measures introduced for operators to uphold their licensing objectives, but in any event, this may only be commercially viable to apply to higher stake machines.

Despite the view that arcade machines are generally low-risk, there’s still more which can be done to further reduce the potential for harm. Perceptions have already changed regarding fruit machine style ‘Category D’ machines. BACTA (the British Amusement Catering Trade Association) and its members have pre-emptively and voluntarily committed to prevent under-18’s from playing on the machines.

It’s difficult to see a move away from children being allowed to play Category D machines, as there is such a long-held perspective they are low-risk and they exist for family entertainment. The ramifications of imposing age restrictions on these machines for seaside resorts would be so great that any such proposal would be met with a high level of resistance.

Will seaside slots be a feature of Britain’s resorts in 2050? I would like to think so. Most people have taken their families to an arcade on a seafront at some point and have fond memories of such times.

While gambling in the UK looks subject to potentially sweeping reforms in the long-term, the seaside arcade sector looks to have a future as bright as the famous Blackpool illuminations.