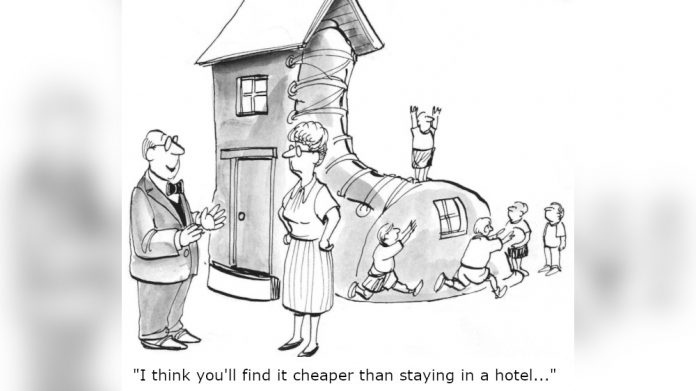 The Staycation represented a generational opportunity – are profiteering accommodation providers ruining things for everyone?

Are we in danger of pricing ourselves out out of the lucrative staycation market?

The restrictions on overseas travel combined with a desire to take a break after one of the most stressful 18-months in living memory has led to a boom in the staycation phenomenon.

The influx of domestic tourists more accustomed to spending an all-inclusive week in Benidorm than half board in Blackpool or Brighton, has benefitted every business that serves the needs of holiday makers with a few quid to spend entertaining the family.

And boy do those businesses starved of income for the best part of a year need to see some money flowing through the tills?

However, the desire to make hay while the sun shines has come at a cost with accusations of profiteering, complaints over the high cost of UK holidays and the emergence of Covidflation as prices become disproportionately inflated in the face of increased demand.

To add some empirical base to the accusations Which? the self-styled champion of the consumer has undertaken some research and the results don’t make for good reading. Overall, Which? found that the costs for private holiday accommodation have increased by 41 percent since 2019.

Which? also found that a seaside holiday in Nice, France, was cheaper than an equivalent holiday to Brighton. Seven nights accommodation in Nice, cost £679, while the same seven nights in Brighton would cost £1,088.

Despite return flights to Nice priced at £406, the total cost of the Brighton holiday for two adults was still higher than the Nice holiday, at £1,131 compared to £1,085.

The only holiday Which? found for this August that worked out cheaper in the UK than abroad was a beach break in Tenby, Wales, compared to Estepona, on the Costa del Sol – but only by £10.

The staycation represented a generational opportunity for resort economies to reconnect with their domestic market. What a shame it would be if the desire of accommodation providers to claw back lost revenue by taking advantage of a unique set of circumstances ends-up being a case of unsustainable opportunism impacting the entire resort supply chain including the humble seaside arcade?

Why don’t you listen?

This government has a terrible habit of dismissing what businesses want and telling them what they need. If any of those in government or Whitehall had actually run a business, that would be a reasonable shout. But they haven’t and they probably won’t, which makes the recent arrogant flick of a hand at business calls for a temporary visa for EU truck drivers all the more galling. The supply chain is in a fragile state because of it.

Business secretary Kwasi Kwarteng sounded more like a modern day Marie Antoinette last week when he responded to the rabble business community demanding a supply chain solution with what could so easily translate to a ‘let them eat cake’ riposte.

That particular cake is unqualified, unavailable, unskilled and highly expensive UK truck drivers. Like the French queen, Kwarteng rustled up ingredients of elitist arrogance and detached ignorance for a cake that could never be eaten because there aren’t enough drivers to transport them to the shops at the moment.

Just as well really, British business is getting sick of bullshit cake – and the government topping of ‘employ British workers’ is delicious in its irony.

There are no British workers – either skilled or unskilled – at the moment.

Ask an arcadian how many applicants they’ve had for vacant jobs this summer, or better, how long they’ve been advertising the same posts.

Now, match that experience with Kwarteng’s letter to the business community when begged to allow EU drivers visas to help ease our supply chain problems.

“I am sure you would agree on the importance of utilising the strength of our domestic workforce,” he said, “and how our migration policies need to be considered alongside our strategies to ensure UK-based workers are better able to secure decent employment opportunities.”

Kwarteng is one of the most amenable, affable and credible ministers in the cabinet, but really, what a total plonker. That response was not a solution, it was a mistimed, mistaken mission statement.

Meanwhile, food shelves are semi-filling up slower than normal, booze is reaching the pubs in smaller capacity and most importantly, gaming machines are reaching this country months late and in some cases at more than ten times the cost.

When business went to its government secretary with a temporary solution, it did so in desperate need of support and with a considered and viable option. Instead it got the dismissive wave of a hand like some low level dandy royal fluttering a handkerchief at a servant.

For some reason, this particular government just doesn’t like to listen to business. It hears it, but it drowns out our irritating noise with hyperbole and rallying calls.

This isn’t the time to be rallied into employing British workers. That’s a decade in the making – the number of job vacancies untaken suggests that it’s British workers who might need the rallying call rather than the UK businesses themselves.

Our supply chain needs movement now – it doesn’t have the luxury of time on its hands.

It needs a quick solution before any solution is simply redundant.

The government needs to rethink its supply chain policy and undergo a cathartic conversion to truth and reality.

Bring EU workers in now, resolve the short term problem and start investing in getting Britons into British jobs on a medium to long term programme.

The supply chain is fundamental to our economic recovery, but more importantly it’s vital to our everyday business and social life.

We dismiss it at our peril. And we certainly wouldn’t want Kwarte ending up like Marie Antoinette and losing his head.