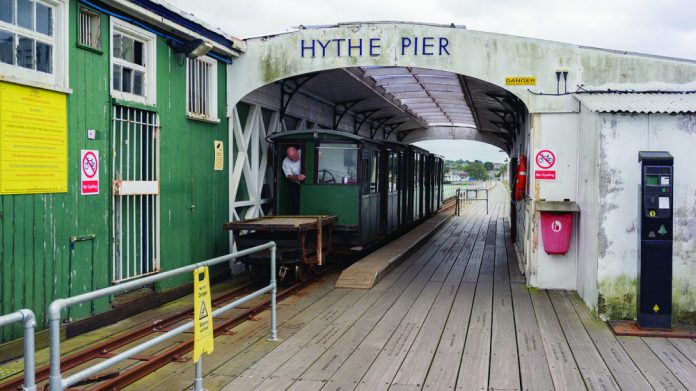 Hythe Pier in Hampshire has been awarded Grade II listed status by Historic England, a move welcomed by the Hythe Pier Heritage Association as a significant step toward full restoration of the 140-year-old landmark.

“Listing marks a building’s significance and celebrates its special architectural and historic interest,” said a spokesperson for the HPHA. “It brings specific protection so that its special interest can be properly considered in managing its future.”

The pier was built to facilitate the year-round running of Hythe-Southampton ferry service, and features contemporary buildings previously occupied by the Hythe Sailing Club and Royal Motor Yacht Club, as well as the railway, which first opened in 1922 using ex-War Office rolling stock.

“The pierhead buildings have good architectural detailing, and the pier’s well-surviving steel and cast-iron substructure, slender columns and cross bracing make it a strong example of a late 19th-century pier with a touch of elegance,” said a Historic England spokesperson.

“The electric railway is still running today and is believed to be the oldest continuously operating public pier train in the world.”

Restoration of the railway is currently the primary focus of the HPHA, which received a £10,000 grant from the Beaulieu Beaufort Foundation in July 2020 to restore Carriage Four.

The carriage was used by King George VI and his aides to visit Hythe while inspecting troops preparing to take part in the D-Day landings in 1944.